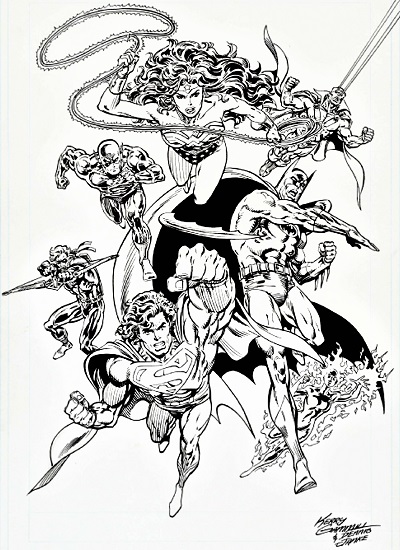 I firmly believe Kerry Gammill deserves mention in the same breath as José Luis García-López, while readily admitting that's based more on his potential at his peak than his output. Both artists had clean, handsome styles and clear yet dynamic storytelling in the Neal Adams mode, making them very attractive to licensors. Unfortunately, Gammill was far less prolific, and I feel his strengths not only better suited Marvel characters, but also that he isn't well served being compared to the Patron Saint of DC Style Guides on the exact same iconic characters but with more mullet/pouches/Chromium. JLGL was much more in his element in the 70s/80s than Gammill was in the Extreme Age, if only for the greater allowance for smiles. Still, this is a nice bit of work, and a rare instance of Martian Manhunter sharing space with the Magnificent Seven Fiveish Justice Leaguers at a point prior to Morrision's JLA canonization. And you don't know-- maybe someday The Green Flame or an ambiguous Oliver Queen/Connor Hawke hybrid might deserve to take the place of Green Lantern and Aquaman. Did you see DC having an entire slate of shared universe shows dubbed the "Arrowverse?" No you did not! The part where a show about an archer being the one that feels the most long in the tooth and ready to be put out to pasture being prognosticated by yourself, I'll concede.
Posted by Diabolu Frank at 12:00 AM