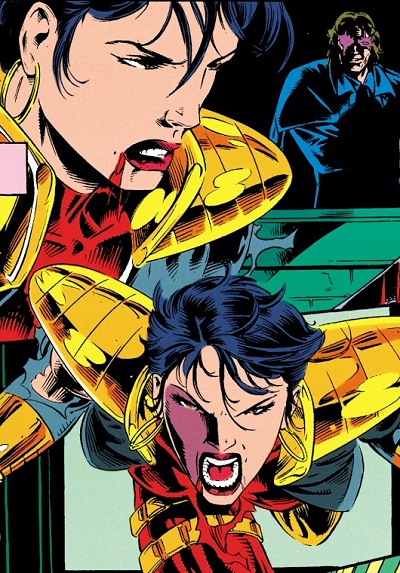 The so-called Baron Üman Von Mauler had gotten the drop on Gypsy, carted her to his house, bound her to a table, and begun to psychically assault her (often involving sexually suggestive scenarios.) Outside, her friends had dug up a corpse and drawn Chokula's ire. The distraction allowed Gypsy to get free physically, and to draw Von Mauler into her head for a home turf advantage. Gypsy engaged in mortal combat with Chokula's "virtual reality ninjas."

Flashing back to age fourteen, runaway Cindy Reynolds was picked up by a lecherous old priest named Father Tierney who kept calling her Nakia and fondling her in his car. Cindy elbowed the old man in the eye, the car crashed, and both passengers were thrown through the windshield. Cindy appeared to survive, and the priest did not. In the present, Von Mauler continued talking about Nakia in familiar ways, taking her to "their" homeland of Romania and telling her she had yet to tap a fraction of their shared powers. Gypsy "killed" Von Mauler on the psychic plane with her energy baton piercing his chest. Von Mauler left an aged corpse in the real world. Who was he? What did it all mean?

Gypsy went back to stay with her former lover Bronze Tiger. John Jones waited as long as he could before visiting her. Gypsy reflected, "J'Onn was watching. He knew. Knew about him. And did nothing to help me... Yes, J'Onn is a Martian. But how does he justify not helping me? ...Guess it's too easy to think of him as human. Every now and then he just does something... inexplicable. Something you can't figure out. Something you can't forgive."

John Jones defended, "I knew he'd come for you one day. That's why I kept a file on him. That's why I wanted you in the Task Force..." Gypsy cried at the betrayal, and over what John had knowingly allowed to have happen to her without intervening. "I also knew you couldn't run from him forever. Triumph's setting up a new headquarters for us. It should be operational in a week. I hope you'll answer my call."