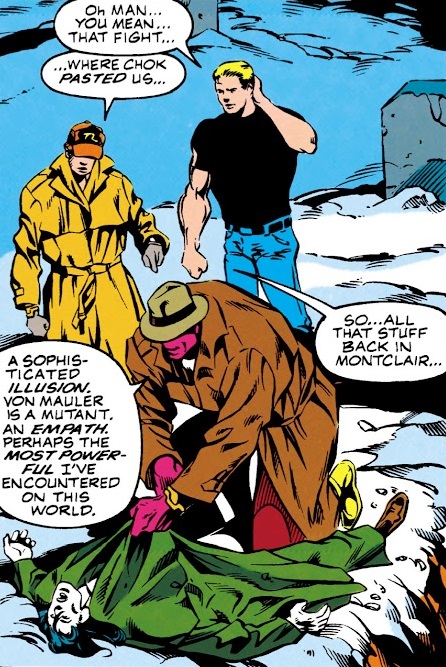 "God... this was supposed to be a gag... and I suppose, my way of one-upping Martian Manhunter-- getting back at him for snapping orders at me like I was some kind of fool. I am a fool. Trapped outside reality for nearly a decade-- trying to overcompensate-- jealous of all the heroes who started with me who have gone well beyond me..." Triumph couldn't find Gypsy and the Ray, even with L-Ron's telepathic third eye. Had he gotten them killed?

Ray managed to find a small electrical source and escape the energy-dampening room, soon flying to Paris... France. Will (or "Billy Mac," as he accidentally and unhappily slipped into calling himself while with L-Ron) eventually reached Ray through his new belt communicator device, and called him back to Paris, KY. At city hall, they found a picture of Baron Üman Von Mauler, dated 1722-1797. Ray talked the team into digging up his grave, just to be sure. The unearthed corpse attacked the team, firing eyebeams that disfigured the left side of Triumph's face. "Count Chokula" appeared to fry Ray's skull and cause the arms of the buried dead to seize Triumph.

L-Ron was not so easily handled, as he used his third eye to draw Von Mauler into his psychic control room, then beat him with a virtual baseball bat. It seemed Despero's murderous instincts were reasserting themselves on L-Ron's ginger psyche, so threats against Chokula's life were not idle. It was determined that this Von Mauler was merely a descendant of the recorded one, but he was also a mutant empath (one of the most powerful in the world) capable of creating illusions, who had been preparing for a confrontation with the Justice League.

Cue Martian Manhunter. "--which was why I had Von Mauler under surveillance. I had planned to deal with Von Mauler in my own time. Your unfortunate prank forced his hand before I had time to prepare her... Gypsy. And now, because of your interference-- we may have lost her forever."