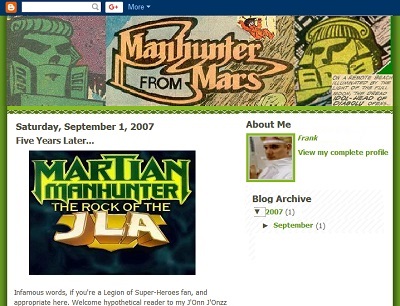 The very first post to this blog eleven years ago was a now probably all-too-familiar bit of self-mythologizing monologuing on the five year gap since my old WebTV page was active, and I did a decent timeline of events on our fourth anniversary. "Our?" Forgive the royal "we." I've had some help over the years on both of these Martian Manhunter web presences, contributing to a few dozen of the 2,777 published pieces still available online, but trust that this has mostly been a numbingly solitary affair. I managed to keep up with (mostly, with catch-ups to fill in the gaps) daily blogging from September 1, 2007-November 11, 2014, a little over seven years in total. However, give or take a half year or so, I've been doing this sort of thing with the Sleuth from Outer Space for about two decades. Forgive me for being a bit maudlin, but that's not a little depressing. Maybe that's why I only managed to knock out a paltry three posts on the month of the "tin" year. Besides, I realigned my priorities to focus on the Alien Atlas' anniversaries instead of my own, and I'm still pretty proud of the podcasts Martian Manhunter's 60th Anniversary Special, parts one and two. Ah, podcasting. That's what did the old girl in. I'd only heard a handful of the things when the primary inspiration for The Idol-Head of Diabolu blog, Rob Kelly's The Aquaman Shrine, co-launched The Fire and Water Podcast with our buddy Shag. As with the Shrine, I knew I wanted one of those too, though it took me a few years to screw up the courage to ask my friends about it (after giving up on anybody ever asking me to do one.) Truth to tell, comments were growing few and far between even then, as the golden age of blogging had already passed, but any notions of continuing a daily blog were squelched by the demands of a weekly podcast. It's worth noting that the Shrine ceased daily blogging on November 09, 2016, with a farewell post over a year later, and that was a far more accomplished and popular endeavor than I've ever had. Not to brag, but I smirked a bit while grazing old posts when I saw one commentating 100,000 page views in '09. Google currently credits the page with 1,432,231. On the one hand, it took Blogger several years before they started their count, and my original counter no longer exists, plus my own constant refreshing while editing likely accounts for 400K. Still, I guess there's something like an accomplishment in suckering a million people into glancing at your blog while stealing a piece of art from me that I borrowed from some copyrighted periodical or commissioned from an actual artist. Maybe those seven years in solitude (plus the 2-3 on WebTV) weren't a total waste... though I'd trade them all in for something creative that's mine instead of free publicity for a corporation's neglected intellectual property. Mothers, tell your children, not to do the things I've done. Anyhow, I wish I'd been drinking heavily while writing this post instead of just sounding like I had been. Point is, I'm back to daily for a little bit (One week? No more than a month, at best.) to celebrate my China year with the Martian Marvel, plus to do some scripting ahead of a crossover podcast and to motivate myself to promote original art I've cruelly had collecting dust for a long while now. By the way, if you think I had the foresight to take a screen capture of the blog on its first day, you're giving me way too much credit. I cobbled together a vague approximation of it based on the Internet Wayback Machine, Blogspot's header image album, and an early rare picture of myself lifted from old comments. A co-worker took the pic while I was wearing a white vinyl jacket, a stripper's garter as a headband, and holding a glass wand to affect a Flash Gordon vibe. I had a life before blogging, you guys.
Posted by Diabolu Frank at 5:58 AM

I just wanted to say thank you for all the time you put into this cause M.M. is my favorite.

Thank you for the kind words. I'll keep it up throughout September, and try to get something up at least once a week thereafter.