I've got a lot going on. I won't bore you with the details, or trouble myself obfuscating those details on account of my well-documented internet phobia, but just trust me on that. Life stuff, mostly happy, but also the hobbying you handful of people distract yourselves from the gnawing pit of existential doom with at my various poorly trafficked, money-losing avenues of folly. I'm trying to get out a (work) week of daily blog posts (thems some rusty muscles) at least throughout September to make up for my near total neglect last year (and return to we(a?)ekly offerings thereafter.) I'm also stockpiling to make sure I don't blow a giant hole in the weekly Rolled Spine Podcasts schedule while also intermittently shepherding some ambitious projects in development for next year. I'm putting in a valiant effort to waste my remaining life tossing dubious content into the void, is what I'm saying.

So anyway, I had to go across town for a meeting the other day when my Twitter started blowing up, and to make a long story about me into a longer rant about what me thinks about a thing, there's a new Martian Manhunter maxi-series that I suppose I ought to address. I wasn't sure I'd have time for this distraction from barely covering J'Onn J'Onzz in the context of synopsizing a poorly received 23 year old team book on my moribund Martian Manhunter blog, but the dudes were nice enough to launch this project as a twentieth anniversary gift to me personally, and so I wanted to thank them by over-analyzing the modest details of their announcement from a place corrupted by anger, jealousy, resentment and disappointment until I kill any enthusiasm and the book gets cancelled after eight issues instead of its intended expiration date. You're welcome, gents! Try the Zoloft. It helps. Also, I couldn't get to the first day of a local con without paying $45 for, like, two hours, so I decided to pout and not go at all. I have a few hours to kill. 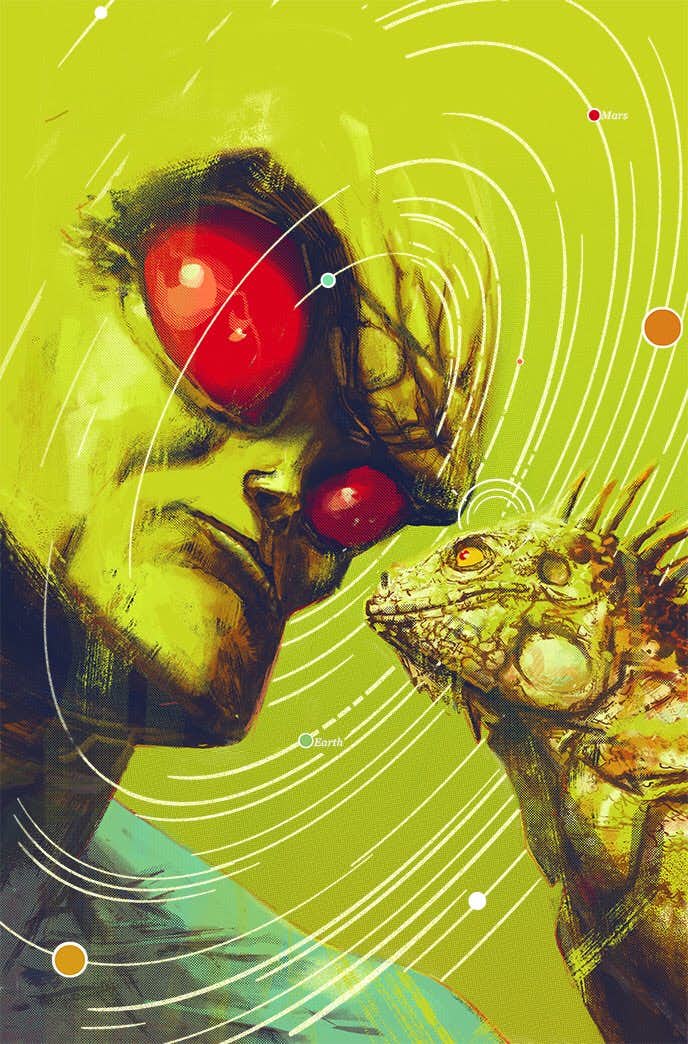 I'm one of The Olds, so to get a deeper look into this announcement, I naively first went to the big comic book websites, where people who desperately need proofreaders breathlessly drafted clickbait headlines on their smartphones about movie rumors interspersed with dutifully dumped press releases about those comic book things without additional comment. Meanwhile, The Hollywood Reporter did 1,100 words and posted a wealth of (initially) exclusive preview art. I can't overstate enough that Newsarama did 350 words, and CBR seemingly less with only one picture. I can't say for sure because of the ad blocker blocker that drives me to any other site but trash fire home of the limp lame both-siderism hot take CBR. I guess they were busy doing a series of articles about the potential of a Mark Wahlberg Mile 22 shared universe or listing things alongside an opposing bunch of things.

S'pose I've stalled as long as I can to avoid discussing the actual topic without it being really obvious that I don't really want to do it. Look, when I started this blog, the Martian Marvel was starring in the JLA Classified serial "Ghosts of Mars" and was announced to costar in a new series of Batman and the Outsiders. Then JLA Classified was canceled and not only was Manhunter out of the Outsiders, but the creative team was fired and the material they produced was replaced without ever seeing the light of day. In the eleven years since I started this blog, J'Onn's been murdered without being avenged, turned into a homicidal zombie, given a bright new start that was terminated within a year, got New 52'd, is no longer a founding member of the JLA, was barely a member of Stormwatch before erasing everyone's memory of his ever being a member, appeared in an unwanted Justice League spin-off title that was promptly cancelled despite launching with 52 variant covers, appeared in another unwanted Canadian Justice League spin-off title that was cancelled even sooner, and when he finally rejoined the Justice League people cared about, there were murmurings he was about to turn evil and finally betray the team. 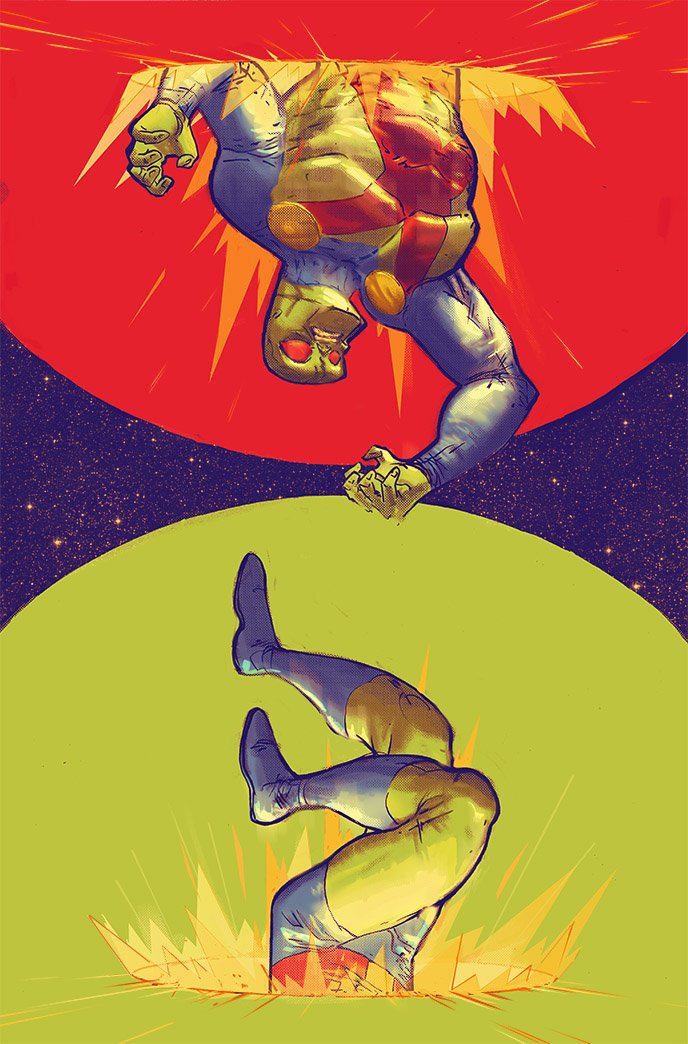 There weren't a lot of people reading the Ostrander/Mandrake ongoing series, but most liked it, and I was not like them. I criticized that book ceaselessly on DC's message boards, wanting another book, but bought every issue for three years. DC gave me a different book five years later, which was far worse, so I didn't buy that one. DC heard my complaint, and went another eight years before trying again. I had high hopes for that title, with a promising if unfamiliar writer and a "fan fave" style artist. They killed Martian Manhunter in the second issue and did a year long adaption of the 2003 Shyamalanian thriller Identity (62% on Rotten Tomatoes) starring a cross between Forrest Gump and the Elephant Man called Mr. Biscuits. That was the series where it turned out everything we knew about Martian Manhunter was a lie and that he was really an automaton created through necromancy as a genocide machine against Earth that ended with his becoming a giant anime mech and killing Mars instead or something. I'll be honest, I hated that series the most of all and never finished reading it. You might not think it's fair to harshly criticize a book you never finished, but I also never did freeze frames on the walls of John Doe's apartment in Se7en. I'm pretty sure I got the gist of it, and I knew I didn't want none of that.

Point being, I've financially supported a lot of Martian Manhunter comics that I did not enjoy and knew full well I could get cheap as a back issue if I felt compelled to inflict that upon myself, probably in service to writing a character-centric blog as I watched blogging in general die all around me and was subsidizing the evidence that none of the effort I was putting into educating the public about J'Onn J'Onzz was having any appreciable impact on the quality of his representation. Whether I speak out against them or keep silent, they all fail in short order, and the frustrating futility of being a vocal fan crushed the light and life of that very same fandom. 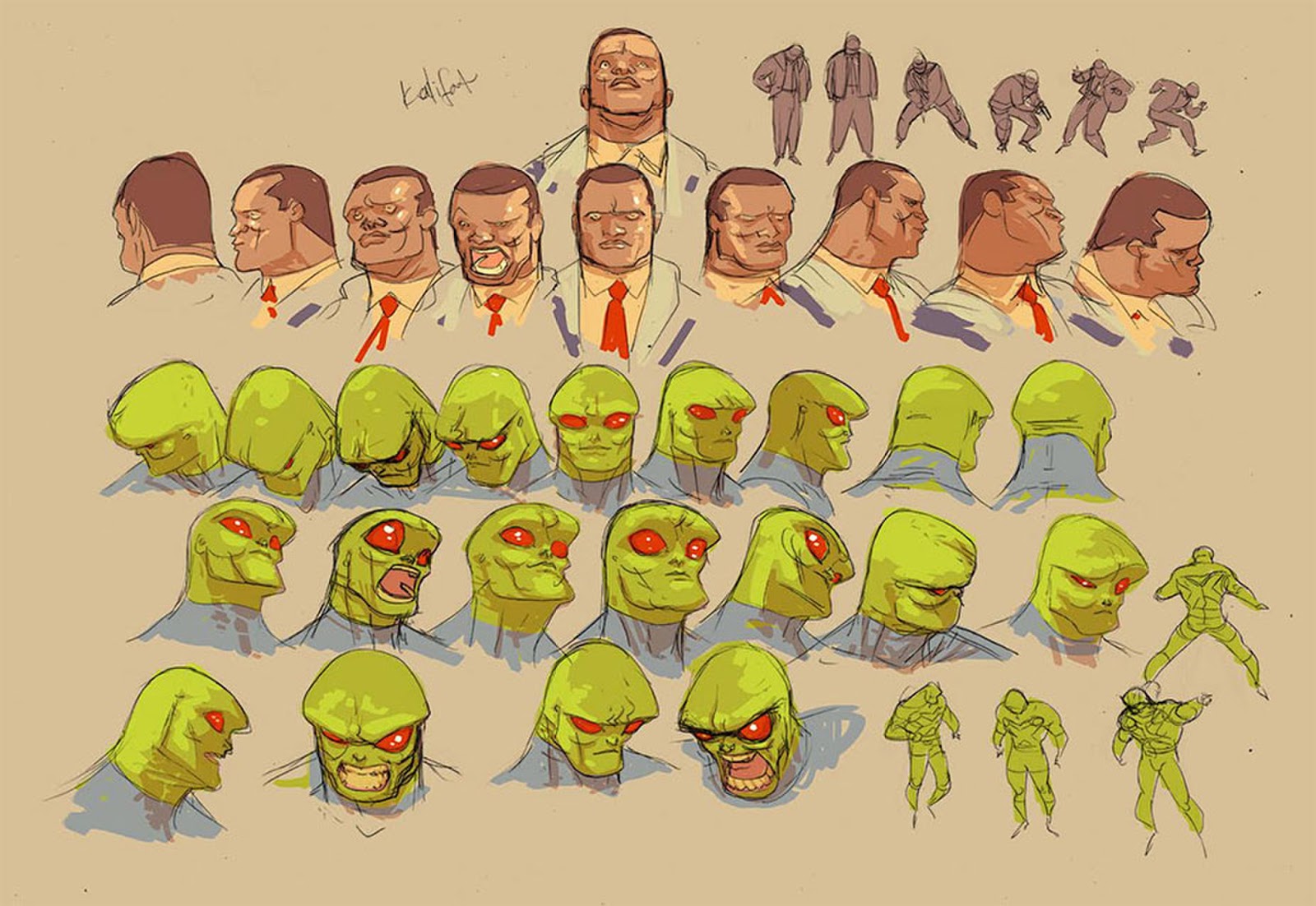 Okay, here's another series. It's advertised as getting a year, which in today's market is pretty generous, so it's got that going for it. I'm supposed to pontificate on this, but I'm flashing back on all the hours I spent drafting pieces around the months of speculation about whether he would die or be reborn or get his own New 52 series or join a new Justice League International. Remember that time I did a run of synopses covering the Image/Wildstorm issues of Stormwatch that didn't even feature the characters on the team J'Onn was on for two trade collections that were essentially retconned? Why am I still doing this? Why are you reading it? The writing of Martian Manhunter on the Supergirl TV show is better than anything in the comics since I've been running this blog, and all those Berlanti shows are horribly written (I never finished season two, tried to jump back on season three, but lost interest again.) The best writing overall in the past decade +1 was on the DC DTV animated movies, but only when Dwayne McDuffie was still there, and he died in 2011.

Everything sucks. It's been a soulwrenching couple of years. And now I get to contend with another Martian Manhunter book that'll probably bum me out and cost me $48 a year retail plus I'll feel obligated to buy the trades and maybe even finish that damned Williams/Barrows series before the end of the year. Ugh. At least I vented a bunch of the negativity I'd rather not ooze all over a perfectly innocent (until proven guilty) incoming creative team like this was The Evil Horde Slime Pit. Maybe tomorrow I can approach this subject with more objectivity...
Posted by Diabolu Frank at 12:52 AM

The world and the country right now feels like a cauldron of hate, anger, and division. And even a place of retreat ... like comics ... at times feels like a battleground.

Hang in there man! We need folks like you on that wall!

I’m with you lads, the corruption bit has me frowning... there’s nothing I’ve ever seen in a J’onn story that leaves room for that reading. ‘Everything you thought you knew was WRONG!’ shouldn’t equate to ‘WORSE’. J’onn has the heart and soul of a hero and that’s not something you can grow, even as a shapeshifter.

Making comics J’onn Black gets a neutral response from me - I see the good reasons but I’m kinda used to John Jones as a white chap in a brown overcoat. What I don’t like is the hulking Harvey Bullock build, and they need to sort the colouring so it reflects a skin tone that’s more readable as Black. Those character sheets could be Sam Sameon, which is really not where we want to go if John Jones is playing an African American.

First time I read your post I thought you were unfair to Williams and Barrows'run, called "Epiphany" and "Red Rising". I thought I kinda enjoyed it.
But then I realized that I actually disliked what it was : There was no Martian Manhunter in it for quite a while. I only enjoyed it because it was an inconsequential bad story that gave the character a new origin that I kinda enjoyed. I foolishly thought that this new origin would allow the character to get a fresh start, and was different from Ostrander's stupidity. (Yes I preferred when the epidemic was just a disease going around, like Dematteis implied, rather than a biological weapon and Malefic is a ridiculous concept and who the fuck writes evil twin brothers unironically ?). I enjoyed this origin story, I really did. I thought it had greater tragedy than ever before while still building up the world and culture. Nonetheless, we share a common hatred of this new book. I grew up with Carl Lumbly as the Martian Manhunter, and picturing him as black was the norm for me. But a freaking corrupt cop ? The origin story retconned AGAIN ? The atrocious art style ? Just cease and desist.