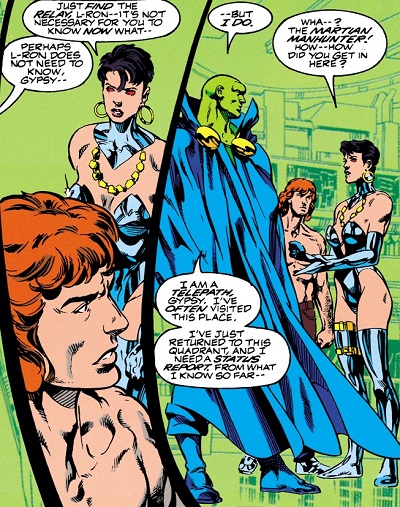 The overloading of the charged particle field at the Crystal Palace had knocked out Triumph's powers, and the Ray was slowly losing his due to an inability to recharge. They called on Gypsy to use her illusory powers directly on Despero's telepathic third eye to create a psychic plane by which to enter his aneurysm-racked mind to find and free L-Ron. Side note: Gypsy was way hot for the human shirtless ginger mental image of L-Ron. Next, not-Despero ripped his way through the palace seeking a path to disarmament. Martian Manhunter checked in on Gypsy & L-Ron telepathically, but was already aware of how things were playing out because of his knowledge of how Triumph's powers work and how Vandal Savage thinks. Since the charged particle field made the Crystal Palace so dense that even J'Onn was unlikely to break through it, he announced that he was moving on to secondary objectives, triggering Gypsy's abandonment issues from Judgment Day. "Gypsy, there are two possible outcomes: the team survives, the team does not survive. In any case, I am of no use to you. It is, therefore, my responsibility to go where I am needed... I wish you well."

At one point, L-Ron was knocked out again, and psychic Gypsy had to kiss him awake. Triumph spied on Savage, who spoke of how Will was clearly fascinated by their similarities and what he could become if he embraced his ambitions. Vandal also noted that the JLTF was his only means of escape, so Will should stop wasting time hoping he had a secret exit. L-Ron managed to halt the self-destruct, so Savage slipped away with some of his men to pursue his next objective: murdering Miss Watkins for the attempts on his life. The JLTF arrived too late and with too little evidence or authority to arrest him for the crime. That worked out fine for Martian Manhunter, who had assumed Watkins' form to be "killed" in her place. Of course, Vandal Savage would soon detect the deception, so Watkins and her child would have to go into hiding while the JLTF braced for his ire...