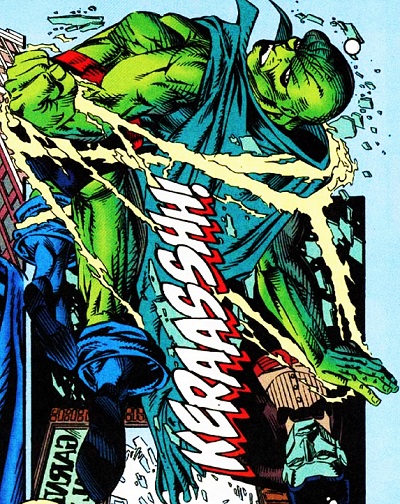 A young African-American lad had fallen through the wreckage of the abandoned Justice League International embassy, and J'Onn J'Onzz cursed himself for leaving the matter to local authorities. Traveling underwater, he used his Martian Vision to blast through a grate, then telepathically reached out to the boy, who was startled by "W-words-- inside my head--?" and questioned the notion of a detective that could read minds. "I'm very successful." Tony was carefully secured by J'Onn, though the boy wondered about his green skin and big knot on his head. "Acne." The rescue was interrupted by the Golden Age Ray, who "telepathically" demanded to speak to J'Onzz about recruiting his son into the Justice League Task Force without first asking his consent. Martian Manhunter took the boy to safety, then confronted the invisible yet overbearing Langford "Happy" Terrill about his adult son's choices.

"I appreciate the assist, friend, but I would ask you to adjust your tone... Incidentally, what you're doing isn't exactly 'telepathy.' You're pulsing solid light energy on a low frequency, causing my bones to resonate, reproducing the sound of your voice. An interesting skill, but not telepathy."

"You'll note the difference." The Ray switched from verbal to physical aggression, repeatedly referring to J'Onn as "alien" as though it were a pejorative. The Ray had assumed his son had been called away by the League, and despite Martian Manhunter clarifying the matter while attempting to halt hostilities, Ray called him a coward and treated him like a liar... so the Alien Atlas threw him into a car and flew off. "I'm curious as to why you do not believe me. Then again, I can only assume prolonging a senseless destructive battle with me is easier-- than dealing with whatever's come between you and your son."

"Missing" was by Christopher Priest, Howard Porter & Robert Jones. After I started seriously collecting Martian Manhunter appearances in the late '90s, this issue was one of my earliest and favorite guest appearances to pick up. It does a great job of demonstrating J'Onn's powers, personality, and dry humor. The art gave him a Chromium Age polish rarely afforded a character who spent most of that decade drawn by artists who owed more of their style to earlier eras. A lot of J'Onn's charm is in his retro elements, so I wouldn't trade Sal Velluto's Neal Adams by way of Italy, or Eduardo Barreto's Russ Manning, or Ramon Bernado's Buscemaisms, but it was cool to see the Manhunter in the mold of an X-Men type artist every now and again. Also, while his look and influences would change mightily by the time he did JLA, I can still see a lot of Porter's future handling of the Alien Atlas in his poses here, and if nothing else, his noted enthusiasm for the character was already evident.
Posted by Diabolu Frank at 12:00 AM

Yeah, JLTF & The Ray quietly crossed over quite a bit.