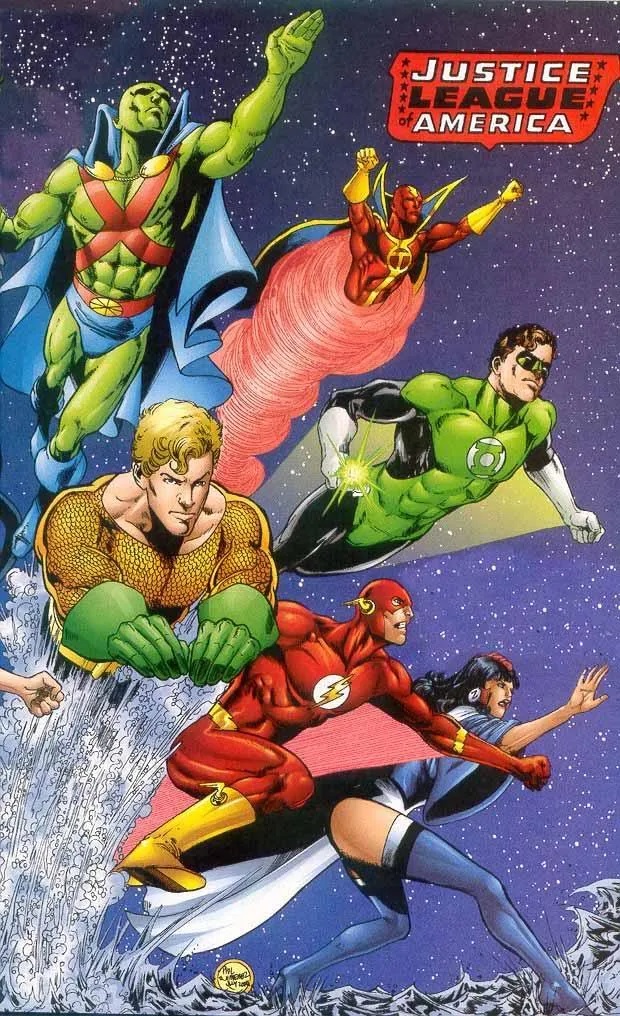 I'm still tweaking the page, and I decide I'd like one of those little pictures to pop up in the tab/favorites menu instead of a Blogger.com "B." This occurs to me while I'm at the Aquaman Shrine, another blog I visit on the daily devoted to the least loved JLofA original members. The fact is, Rob's site was the primary inspiration for my dusting off all my old references from the "Rock of the JLA" site and reworking it into a blog, and on mentioning this to him I snagged a free link and some insight into creating a "FavIcon." That much I managed on my own, but finding someplace to host the sucker, and failed work-arounds when I couldn't, have wasted a good chunk of my day. So no FavIcon for now, but I figured dropping a link to his page and highlighting Aquaman today was still in order.

Fact is, the former sea king will make regular appearances here, not just because I'm fond of the hero. but because he's also one of J'Onn J'Onzz's closest friends. Both share the experience of being fathers who lost their families under tragic circumstances. They were lumped together from the onset as the social outcasts of the Justice League (with the lamest weaknesses.) Briefly, the pair shared solo features in Adventure Comics when neither had a self-titled series all their own. Years later, J'Onzz's return from Mars instigated Aquaman's disbanding of the Justice League, which was then reformed with Detroit-area outcasts around the two remaining founders. While there was friction between the two at this time, and in retroactive continuity always had been, J'Onn acted as Arthur's chief confidant and conscience until the Atlantean handed him leadership reigns of the team while Arthur sought to reconcile with his estranged wife, Mera.

When Aquaman finally received a new ongoing series in the 1990's, the Manhunter monitored his friend in this turbulent time, and went to his aid when he collapsed from exhaustion. J'Onn was among the first heroes to question the changes Aquaman underwent after losing his hand to piranhas, and again allowed himself to be abused by his friend when Arthur needed a telepath to deal with an ancient Atlantean problem. The two continued to relate, commiserate, and agitate upon the formation of yet another JLA, and in being left out of same in it's most recent incarnation.It's to be expected, seeing as the book's latest writer favored the Satellite-era team Arthur & J'Onn dismantled. It's okay though, as the horribly redesigned Martian Manhunter will join the lame young Sword of Atlantis version of Aquaman in Batman's new collection of Outsiders. Brothers in infamy...

Above is detail from a profile page by Phil Jimenez of our heroes in better days, ironically enough, the same Satellite era J'Onn wasn't really a part of. The pair is often pictured together, but all the shots I have handy are of "Aquaman the Crusty Pirate," which if you visit the Aquaman Shrine you'll know is inappropriate for the occasion. Click the pic for a better view...
Posted by Diabolu Frank at 7:42 PM

in JLA #12(the newest issue), there's a long conversation between MM and Aquaman, with hints they'll be returning to the League at some point...

Aquaman and MM's histories are, as you write, very intertwined.

I did not know that, seeing as Wonder Woman and Roy Harper are the only current members I care about. I just might have to try picking that one up next time I'm near a Bedrock City. I'm surprised, considering Meltzer all but ignored MM and Aquaman in "Identity Crisis."