The Vile Menagerie: THE OSPREY 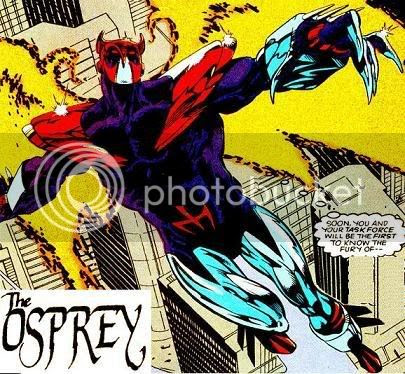 You want to know about this character? So do I! I read through back issues and the web, and only came up with a one line biography for my trouble. Darn it, I'll at least quadruple that effort!

For some reason, Mark Waid wrote several team books around the time of Zero Hour, going so far as to create dramatic new line-ups and status quos, only to abandon the titles to other hands within a few issues. Such was the case with Justice League Task Force, for which he wrote only two scripts featuring the book's final group constitution on his own before co-writing another pair with Christopher Priest, who then finished out the series' run. Waid introduced a new villain in his last solo issue with Sal Velluto and inkers Jeff Albrecht and Romeo Tanghal. The Osprey seemed to be intended as a nemesis for the Manhunter from Mars, but the accompanied image notwithstanding, never got off the ground. The character looked very cool, and even rated his own logo. Personally, I've always wondered if maybe Glenn Gammeron became what The Osprey was intended to be, but I expect somebody would have to ask Priest about that. Below are his only lines ever.

First Appearance: Justice League Task Force #17 (November, 1994)
Quote: "'Green Guy'? J'Onn...here and gone. Seems I'm forever a step behind you, J'Onzz. That will change. Soon, you and your Task Force will be the first to know the fury of--The Osprey."

Beyond that, the only background lies with the word itself. The osprey is a bird of prey with colors that run toward black and white (with blue & brown in the mix.) It is medium-sized, a fish monger, and is found on all continents except Antarctica. The raptor is highly adaptable to different environments, so long as they are near enough to water to provide food. Said bird also inspired the V-22 Osprey, a troubled U.S. military project dating back to the mid-80's. This osprey is the first helicopter with both VTOL (Vertical Take-Off and Landing) and STOL (Short Take-Off...) capabilities. Basically, it can work as either a long-range turbo propeller aircraft or a standard chopper.
Posted by Diabolu Frank at 9:42 PM