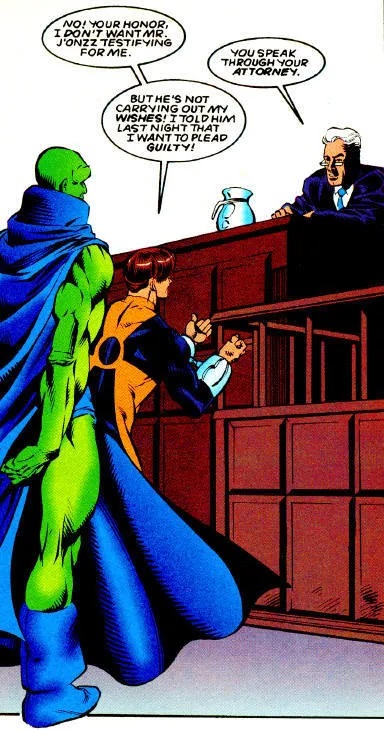 J'Onn assisted Damage's defense in the city of Atlanta's criminal case against the young man, after he had accidentally leveled a large portion of his hometown upon first discovering his powers. The Manhunter from Mars appeared out of of nowhere when he was called as a mystery witness, so as not to incite the angry crowd outside the courthouse. An angsty Grant Emerson (as opposed to the ever jolly Damage of Bizarro World) protested J'Onn's aid, wishing to be punished for the harm he'd caused, but both his lawyer and judged intervened on his behalf. After J'Onn J'Onzz was sworn in, he testified that he had never met Emerson, but knew of his courage through Superman and the Ray II. As heresay is inadmissible, J'Onzz was instead allowed to speak as an expert on adolescent super-heroes. He noted the stress and responsibility placed on super-heroes, and delivered a rousing speech on the most important thing he's learned about inexperienced powerhouses like Damage.

"...Whatever their powers, they are still young. Their abilities challenge them to grow up even faster than their non-metahuman peers... and whether we admit it or not, nurturing neophytes is important, because the world isn't going to be any safer tomorrow than it is today... the next generation needs heroes too. But more than that, these young heroes need to be guided, respected and validated simply because they are here... When things go wrong, they need to be steered away from self-pity and reminded they have a responsibility. If we can help them to realize that responsibility and become willing to act on it, then we've helped them become worthy of the power they've been given-- and we've made ourselves worthy of them."

Emerson's attorney concluded, "Thank you, Mr. J'Onzz." The Manhunter was persuasive, but this was only a hearing. The U.S. Government stepped in to bypass a trial, instead allowing Sarge Steel to forcibly assign Damage to the New Titans. By Tom Joyner, Bill Marimon and Don Hillsman.
Posted by Diabolu Frank at 5:39 AM

Thanks so much for suggesting the quote. Excellent words! I am sorry that it took my over a year to get back to you. I am working on getting the word out and collaborating with other like minds of justice and citizenship. Many thanks.