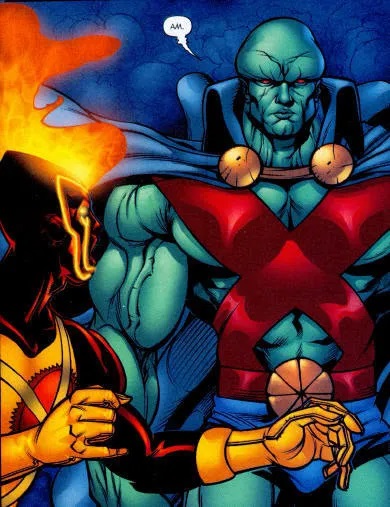 Shortly after Identity Crisis, Green Lantern John Stewart confronted the unidentified young man who had displayed an appearance and powers similar to the fallen Ronnie Raymond's. This new Firestorm explained while hovering midair that he was essentially struck by a bolt from the blue, and his new powers just manifested on their own. Confirming the story, John asked, "J'Onn?" "Huh? Who's 'John?'"

Red eyes appeared to Firestorm's side, before a familiar visage developed. "I am," said the Manhunter. "I believe he is concealing something. But it is not about our friend. As far as Firestorm goes, he is telling the truth. This has all come upon him very unexpectedly. Hmm. Tiamat's forces are preparing to attack. We are needed."

John Stewart explained that the League understood a super-hero's need for secrecy, "which is why my colleague didn't probe any further than he had to," and presented the rookie with a mechanical means of contacting the JLA.

"John?" "J'Onn." And off they went. What the Manhunter detected was likely the new backstory for Firestorm created by Dan Jolley and ChrisCross, this time with inker Rob Stull. Jason Rusch was an underprivileged teenager reared by an abusive father. Rusch was struggling to enter college and forced by dire straits into a one-time drug run that turned sour right around the time he inherited the Firestorm Matrix. Early on, he unintentionally killed the drug dealer that first coerced him into the run, after said pusher tried to kill Rusch himself. All matters best not detailed to an already suspicious Justice League.