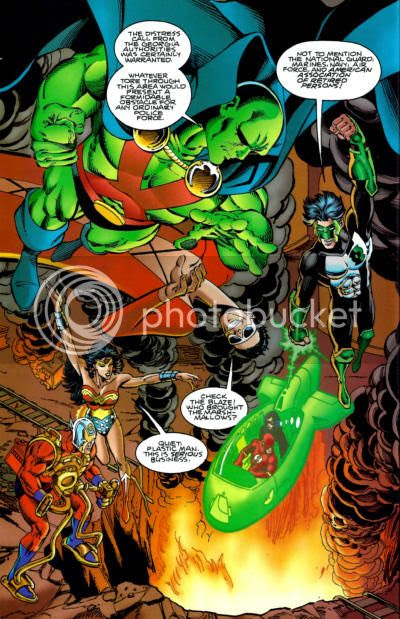 The Manhunter from Mars confirmed, "The distress call from the Georgia authorities was certainly warranted. Whatever tore through this area would present a formidable obstacle for any ordinary police force." Quite an understatement, as Green Lantern Kyle Rayner, Plastic Man, Wonder Woman, Huntress, Flash and Orion surveyed considerable damage to the landscape. A tanker truck suddenly flew through the air in the League's direction, so Manhunter immediately took charge. "Flash. I want a reconnaissance report..." Flash promptly complied, but was shaken before he could give a telepathic reply. Shortly thereafter, Manhunter dangled limply by his cape from a shard of debris, with all but Orion and Huntress having fallen before, as J'Onzz had put it mildly earlier, "Someone who presents a challenge." 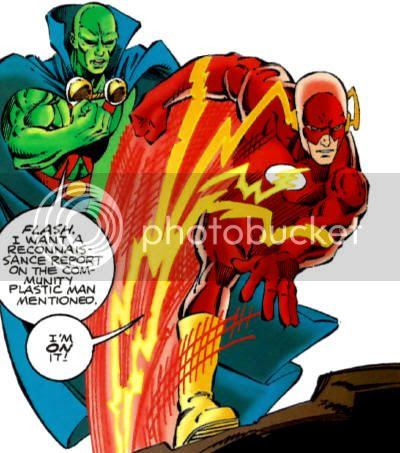 The Martian Manhunter thankfully came to at that point, noting, "I don't believe I've ever been hit so hard in my life. I was protecting a bystander, and I was hit before I could use my phase power. Where's Orion? I've lost my telepathic link with him... This isn't a fight. It's a war." J'Onn J'Onzz flew into combat while the League regrouped, Orion confessing, "Legs... too weak to stand..." Wonder Woman complained, "Bad enough Superman doesn't respond when I call him! But J'Onn shouldn't have charged off alone! The League should function better than this. Must be because we're not used to being beaten so badly!" Doomsday had come again, and it wore a battered Martian on its shoulder spikes like a trophy. 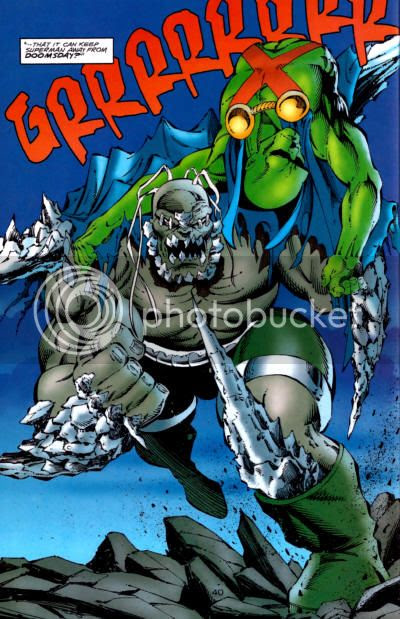 Wonder Woman launched into an ill-fated attack. "I never, ever thought I'd see anyone do that to J'Onn. You must have found some way around his phase powers! ...Strategic fighting such as this is far beyond your capac--UHN! How--? J'Onn himself tried to contact you telepathically but found nothing there! There should be no sense of reason... no... mind!" Doomsday replied, quite eloquently, "My own mental defenses barred your overconfident friend from the truth." Earlier in the narrative, Brainiac had appeared to have been killed in a final battle with Superman, but he had instead been gravely injured, requiring a new body. Coluan time-travel technology had allowed Brainiac to save Doomsday from destruction at the entropy point after the events in Superman/Doomsday: Hunter/Prey, and the villainous mastermind's intellect now resided in the behemoth's form. Trapped in customized restraints, the League were mostly unable to come to Superman's aid upon his arrival on the scene.

With some help from Aquaman, the Man of Steel foiled Brainiac's plan to turn Earth into a new Colu, using Psi-Blockers from a previous encounter to drive the telepath from Doomsday's mind. Superman then lured Doomsday into a JLA transporter tube, which teleported the monster to the moon. 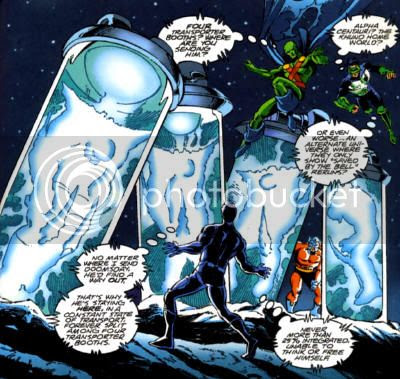 Rescuing the League, Superman joined his team in battle. Although Green Lantern initially followed Martian orders, the Manhunter stated (while forcing Doomsday onto his back with a suffocating fist to the throat,) "Easy, Orion, Superman has a plan in mind-- and we would do well to follow his lead." Superman thought to himself, "One minute. That's about all I need. Harder than it sounds. Even for Orion and J'Onn, lasting a minute against Doomsday-- is practically impossible." In that time, the two Leaguers held their own, until Superman managed to divide Doomsday's form between four active transporter booths. "Never more than 25% integrated, unable to think or free himself." Manhunter immediately saw a flaw. "And if someone should try to take Doomsday?" Superman promised he would automatically be teleported, "to a location only I know of."

Dan Jurgens provided story and art, with a nice Image veneer by inker Norm Rapmund. I wonder if Jurgens' constant trampling of all DC super-heroes to show how much better Superman was than all of them combined played into his inability to maintain his profile at DC after the entire Superman line had a forced creator turnover?
Posted by Diabolu Frank at 12:13 AM