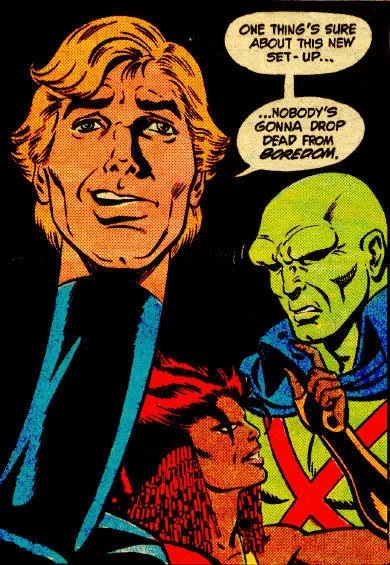 While Aquaman and his fellow Leaguers sifted through the wreckage of the Justice League Satellite, floating dead in space, he declared this the end. Sickened by the state of his super-team and disheartened by his wife having left him after years of emotional absence, Aquaman came to a startling decision. Before a U.N. assembly, he disbanded the Justice League of America, citing the absence of the League's most powerful members in Earth's time of need.

"During what's come to be called the Earth/Mars War... Superman, Wonder Woman, the Flash, Green Lantern-- all were absent... The world deserves something more than a part-time organization of uncommitted dilettantes." He suggested the formation of a full-time League, made up of individuals with no other duties placed before the team. "In a hundred and more languages, the world's representative react with shock-- as one quiet observer in the shadows nods slowly in thoughtful agreement with Aquaman's words." This lone Martian continued to look on as Red Tornado, Green Arrow, Black Canary, Hawkman, Hawkwoman, and a deeply reluctant Firestorm refused the demands of Aquaman's re-conceptualized defenders. Zatanna rose to the challenge, as did Elongated Man, but only with the stipulation that his wife, Sue Dibney, would be along for the ride. A tear rolled down Ralph Dibney's face as he considered, "We should have seen this coming months ago... when the Batman quit, and Flash took a leave of absence... and the Atom disappeared in South America... the old gang's been breaking up for almost a year now."

Finally, the long-lost Leaguer who's return proved the catalyst for this dynamic change decided it was time to step out of the shadows. "If it is a commitment you seek, may I offer mine? I stayed on earth, because I am no longer wanted on the world I once called home. Every living creature needs a home, my friends--and I would be proud to share yours." Aquaman replied, "We'd forgotten--when the war ended, you stayed on Earth--! J'Onn J'Onzz, the honor is ours." While Elongated Man had been an official member since 1973, he'd barely ever encountered J'Onn J'Onzz, who went into exile to guide his people to a new homeworld several years prior. "The Martian Manhunter, hey? Now we're cooking!" The announcement of a new League had attracted the attention of Mari McCabe and Hank Heywood Sr., which would pay off in short order.

The heroes held up at the Hilton until they could make other arrangements, which afforded John Jones the opportunity to fully embrace the 1980's with his poofy hair, brown windbreaker, and blue jeans. He asserted, "...We must find a headquarters here in New York, or in another large city. Only by living among the people we are sworn to defend can we maintain our sense of purpose and commitment." It was then Arthur introduced John to Sue Dibney, who nearly dropped the drinks she was serving when the Martian dropped his disguise. "Yoick! This is gonna take getting used to!" Zatanna reassured with a hug, "You'll be fine, Sue. Your unaffected, totally human outlook will keep us honest." At that moment, Zatanna spotted a feminine yet bestial prowler outside their window, who was seized by a Martian Manhunter combining his flight, intangibility, and giant elongated hands. A likely deflated Elongated Man asked, "Neat trick, JJ. Going through walls. Mind telling me how to do it sometime?" J'Onzz replied, "You'd have to have been born on Mars, my friend. Now, female, explain yourself." The response was a snort and laughter."...Big, green and handsome. You're much too cute."

"Cute? Woman, who are you?" She was former Metropolis super-heroine and fashion model Vixen, and she had come to join the team. McCabe was soon joined by Steel, but this was not the Black Superman of Shaquille O'Neal vehicle fame. This was the grandson of Heywood, who was himself known in the 1940's as Commander Steel, before becoming a millionaire industrialist. Heywood Sr. supplied the team with a base, equipment, and they also got L.O.S.T. (Low Orbital Supersonic Transport), providing plenty of fodder for pundits. On the support side was Dale Gunn, who'd met General Heywood in Vietnam and become his chief designer, technician, and the inventor behind the League's new toys. He could also handle security if it came to that, with his body armor and sophisticated weaponry. When J'Onn J'Onzz wasn't suffering from Vixen's unwanted advances, he traded barbs with the nineteen year old street kid Paco Ramone, soon to be better known as trash-talking Latino breakdancer Vibe, one of the worst stereotype characters in modern history. "Told chu people...Gill-Man! Chu like my new costume? It's so chill, it's bad!" It sure is Paco. It suuuure is...

Clearly horrified by what his decision had wrought, Aquaman whispered, "J'Onn, this is not what I had in mind for the new League." The reply? "Life is full of the unexpected, Arthur. Accept it. You've no choice." Another such surprise came when, while impersonating a piece of machinery, J'Onn J'Onzz caught the invisible Gypsy sneaking around in the League's new base. "My vision embraces a broader spectrum than your Earthborn eyes..." Gypsy managed to cut and run, but would join the team in a later issue. In the meantime, neighborhood residents alerted to their newly resident super-team pulled together a street party in front of their not-so-secret headquarters, where J'Onn downed a brewski with a Motown native and other Leaguers got their groove on. "Let's boogie!"
Posted by Diabolu Frank at 8:20 PM

soooo close, and yet so very far...

You referring to Aquaman making a bold move to found & lead a new Justice League... but wait-- it's this one?