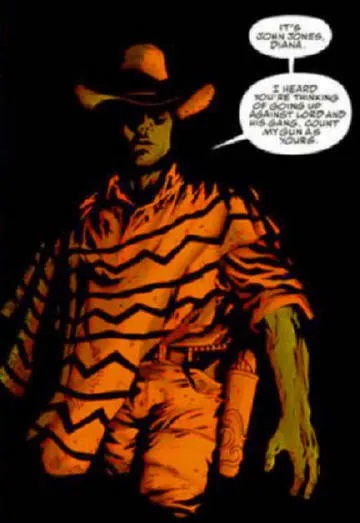 "In Elseworlds, heroes are taken from their usual settings and put into strange times and places - some that have existed, and others that can't, couldn't or shouldn't exist. The result is stories that make characters who are as familiar as yesterday seem as fresh as tomorrow."

Finally, a prestige format Elseworlds release devoted to the JLA! Except it was a western. And Chuck Dixon's script was pretty bad. And it starred guys like Blue Beetle and Guy Gardner against the villainy of Max Lord and Felix Faust. Come to think of it, this book is kind of like the western episode of The Brady Bunch, or whichever episode of a sitcom (say, The Facts of Life) where the cast goes to Europe/outer space/etc. See, once you get over the initial thrill of seeing Indian Brave Hawkman or quick-draw Kid Flash, there isn't much done with the characters.

The saving grace was the somber art of J.H. Williams III, which lent the book a grit the script alone never touched. When Deputy Oberon and the entire town of Paradise was wiped out in a blinding flash, you're spellbound. That is, until you learn the flash is just a really big flamethrower. Woooo! Seeking justice, Wonder Woman gathered a posse of supertypes to battle robot cowboys. Uh-huh. Worse, characters like WW just stood around, while Booster Gold ended up saving the team in the only two gunbattles fought over the 48 pg. story. Without the gorgeous art, it's a sleep aid.

As for John Jones, he snuck up on the group about halfway through the book. WW was honored to ride with him. Why? He contributed nothing-- not even taking out his share of robot cowboys. He pretty much hung out in the background, then got knocked out by that flamethrower I mentioned (big surprise.) After Gold rescued the team, John spirited away the alien Dominator who was supplying Lord with his weapons. Some twist. Oh yeah, western John took on the Man with No Name/Clint Eastwood role, at least in his choice of clothes. However, he was about as driven as Sandy Duncan on The Hogan Family. You know, the western episode.
Posted by Diabolu Frank at 8:54 AM

I would take your review seriously, if you didn't have such a profound hate of the awesome JLI characters.

Booster, Beetle and Guy are great characters. WW may have been the main star of the story, but those 3 stole the show.

Jerry, my problem was likely passed down from editorial. I was sold on a moody western by the art and presumed starring roles for Diana, J'Onn, and Hawkman. What Dixon wrote was a lightweight western for the JLI members with heavy-hitters shoehorned in. I felt gypped.

Actually, there was a brief moment in the early-to-mid 90's when Guy Gardner was my favorite comic book character. Having recently reread most of Beau Smith's run on his title though, and the poor guy didn't even make my top 10 DC characters this year. Smith started that whole Guy-as-Ben-Grimm riff that seems to have carried over into the rejiggered Green Lantern books, and that just makes me sleepy.

Blue Beetle is just alright with me. He's sort of Even Steven, neither liked nor disliked.

I don't think I ever got over not receiving the pin promised to me for purchasing Booster Gold #1 in the house ads. Also, Booster Gold sucks. I liked the original costume though, and he works when played for parody.