The Martian Manhunter was contacted by his Justice League colleague Wonder Woman, who had spotted something landing on Mars while on monitor duty. Imagine his horror when he saw Green Lantern (Kyle Rayner) and Darkstar (Donna Troy) "...frolicking on the graves of a venerable old race." J'Onn tackled the startled couple, already addled from a previous encounter with Darkseid's son Kalibak. 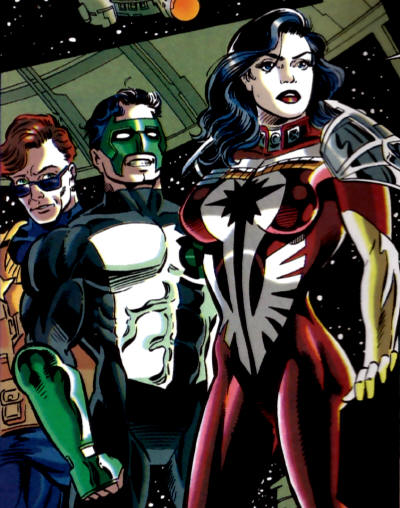 Once the dust settled, J'Onzz told the duo, "Believe me... I have no great desire to be here. My memories of this place are anything but joyful." Perhaps that's why he was so irritable on this adventure, which led the three heroes to track down the uninvited spaceship that first caught the Amazing Amazon's attention. It belonged to "The Syndicate," an interstellar criminal operation often at odds with the Darkstars. "...They've razed an entire quadrant of my people's dwellings... Clumsy fools. Don't they know what they're destroying? This is all I have left! All my people ever wanted was peace... and it eludes them... even in death." The Manhunter launched into the hoods, but was repelled shortly thereafter by an energy cannon. Donna chided, "Damn it, J'Onn-- I never thought I'd be the one telling you to chill out. These syndicate-types aren't your garden-variety space goons. They pack a punch." Under Darkstar Troy's leadership, the group brought the Syndicate's operation down. 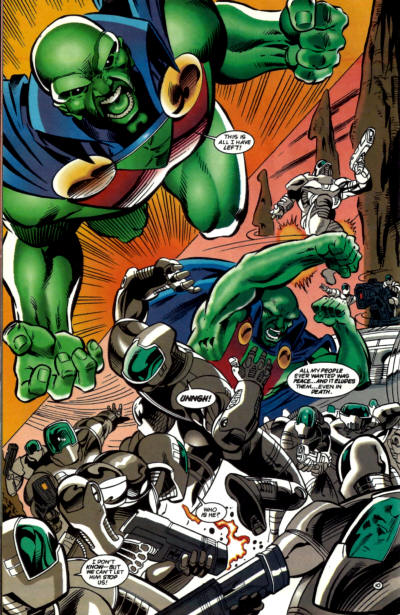 This was the first true meeting of J'Onn J'Onzz and Kyle Rayner, discounting passing glances during crossovers. At first, the Martian Manhunter questioned the new Green Lantern's courage and penchant for jokes, comparing him unfavorably to Hal Jordon, but acknowledged "I stand corrected," as the mission wound down. For Kyle's part, while he related to J'Onn's survivor's guilt after the death of his girlfriend, he still felt J'Onn was too tense and unfriendly. "Even a Martian's got to let off steam now and then. Doesn't he?" Manhunter departed with a curt, "My method of relaxation is my own business-- just as this Syndicate installation is yours. All I ask is that you remove them as quickly as you can. I don't relish the idea of coming back here." As for Darkstar Donna Troy, "J'Onn's not half-bad once you get to know him. Remember, this was his planet once--before his people were wiped out. I think he feels the weight of all those ghosts."

"To Wake The Dead!" was by Michael Jan Friedman, Mike Collins, and Ken Branch. Collins would of course return to J'Onn J'Onzz in Martian Manhunter Special #1 (1996). No love for the Alien Atlas on the cover, where his guest appearance went completely unacknowledged.

Posted by Diabolu Frank at 4:18 PM