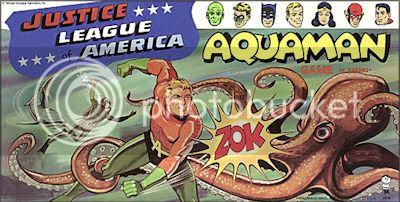 We've had the 1967 Hasbro Wonder Woman Game, and the Flash Game, so it's probably about time to finish the set with Aquaman. There's no miscolored Martian Manhunter fighting crudely drawn dragons or aliens this time, just the same box cover headshot from previous editions. In fact, and I'm ashamed as a die hard fan to have to point this out, but the Sea King was too selfish to share his game board with anybody. Aquaman battles a school of sharks alone. Aquaman battles giant crustaceans alone. Aquaman battles divers armed with harpoons alone. Aquaman even battles his own crudely drawn dragon alone. When he gets back to the Aquacave, the only living thing with him is the pink mutant porpoise he's astride.

I think it should be noted Aquaman got married and had a baby around this time. I guess even the Scion of the Seven Seas needs to blow off some steam lone seawolf sometimes. Maybe if Aqualad were more of a man, he could have come along for some "guy time."
Posted by Diabolu Frank at 9:00 PM

I always wanted to know what punching an octopus underwater sounded like. Now I know.

I am impressed! Blog low-down posted here is absolutely my friend. I neutral want to guess hide up with comments and nobility work. IE browser bookmarks to your blog ethical now, I l stumble upon finance to drive my friends more in the future! The color of the layout is not bad, it is mild on the eyes.