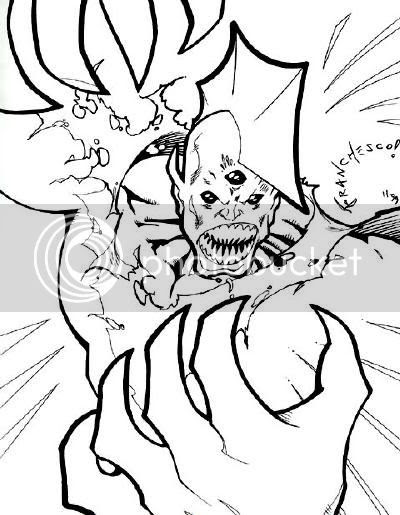 Ah, December... Whatever pleasure I've taken from this chore of a month has been mine by right. Unlike The March of Mongul, I haven't grown disenchanted with Despero through weeks of contemptuous familiarity. Truth to tell, I feel awful that the murderous despot has gotten such a raw deal, especially by comparison. Despero is truly an unimpeachable Martian Manhunter foe well deserving of a lengthy spotlight, and into our third year, he doesn't even have a Vile Menagerie page. All my grand plans lie in dust, but I swear, 2010 will see another December of Despero. As for January, well, that door remains open as well...
Posted by Diabolu Frank at 9:48 PM

Research on Hawkman of all people led me to reread the Crisis of Conscience arc in JLA, and damned if it isn't pretty badass, at least for Manhunter, Aquaman and the mighty Despero. Way better than that superman batman arc.

I've yet to read all the issues of that Superman/Batman arc. The ones Ethan Van Sciver drew were pretty, and they brought Zook back, but I wasn't feeling it enough to carry on. I was definitely more interested in "Crisis Of Conscience," and it was swell seeing two of my favorite heroes teaming up against Despero. Aquaman came out of that looking pretty good, both in story and under Batista's pen.

For next month's theme, how about a January of Jones? No, not the actress from the TV masterpiece, Madmen. This would be 31 days devoted to our hero's early cases as a plainclothes detective, a period that hasn't gotten enough attention on this blog.

You speak truth, but then again, there's a lot of worthy areas left underrepresented by this blog. The back-ups from Detective Comics and House of Mystery are now readily available in Showcase Presents collections, as is the first decade of Justice League of America. The first two years of Justice League International has been collected, as has all of the JLA and "conehead" Manhunter stuff. I feel it's more important that I get back to real obscurities, patching holes in the areas of 60s guest appearances, 70s leftovers, 80s rarities, and a lot more attention paid to Ostrander/Mandrake. My January theme will address some of these considerations.

You're right. It's That '70s Manhunter who needs the most love, especially since there will probably never be a 3rd Showcase volume, which would have collected '70s and '80s material.

"....and a lot more attention paid to Ostrander/Mandrake." I'd be down with that, if only for the discussions/debates about that series. Or a January of Jones. But you already knew I'd say the latter. ")

mc, I've got to re-read Crisis of Conscience. I remember liking it at the time but I can't remember much from it now. (Perhaps Zatanna erased my memory.)