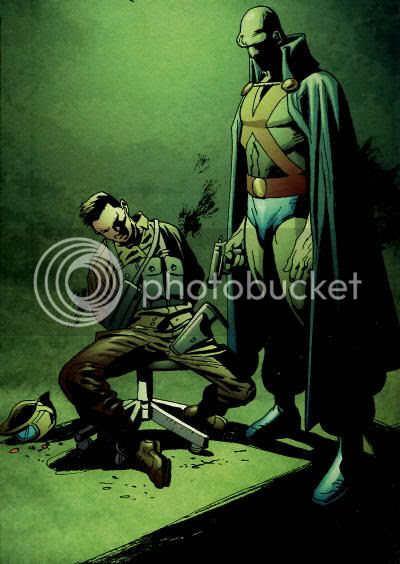 Batman was, by his own admission, "being beaten to a bloody pulp" by Jin Si, while escaping into his own mind to consider evidence in this case.

The Flash, still recovering from the Conqueror Strain, struggled to evade being cut to ribbons by Velocista.

Wonder Woman was doing her best not to harm the mind-controlled army, while fending off Dybbuk, who was commanding her own lasso to choke her.

Martian Manhunter was doing much the same, under added stress from Dr. "Kitty" Faulkner, who passed along electronically the news that Starro had become immune to Green Lantern's stasis field. The Conqueror Strain carriers in Three Sisters, Oregon had begun killing medical staff, and Faulkner had learned the government planned on bombing the region off the map. The Martian Marvel telepathically communicated this development to Batman, who was in the process of being kicked in the face. The Alien Atlas next reconnected mentally with Starro from afar. "It remembers our... our mental... link..." The Starro-virus screamed painfully into J'Onn's brain, "NO TRUCE"

Meanwhile, in Metropolis, Green Lantern John Stewart found the son of General Dvory Tuzik, Azir, working as a dishwasher. Stewart could relate to such lousy jobs from when he was paying his way through college, and acknowledge Azir had been among those who petitioned the U.N. to remove his father from power. At seventeen, Azir could walk away from a life of luxury to uphold his principles, but still lacked the courage to face his father. Still, Green Lantern left him a ring construct that would allow the junior Tuzik to contact him, if needed.

The Manhunter from Mars wished to help his comrades, but Batman said plain that they were expendable, and the pursuit of an alternate plan was paramount. "I understand what I have do. There's no choice, now. The Martian snatched an infected soldier by his collar, and flew off the battlefield.

Marieke swallowed Wonder Woman up in a sea of her own making, while Ghost Lion told the tale of the Titanic, and set a recreation of the infamous ship upon Diana.

Superman saw the worsening conflict at a distance with his vision powers, and extorted permission to operate within China from the obstinate official. While the Dark Knight bled and the Amazon Princess fell, the Man of Steel and Emerald Architect joined the fight.

In an isolated room, J'Onn J'Onzz expressed his deepest regrets to his bound captive. "...This is war, and every moment's delay will mean innocent lives." The Manhunter from Mars then cocked an automatic pistol, placed it to the soldier's brow, and shot him dead...

"Conduct Unbecoming" was scripted by Gail Simone, penciled by José Luis García-López, and inked by Sean Phillips.
Posted by Diabolu Frank at 9:00 PM

After reading the last paragraph, I now have to read this. From a philosophical standpoint, I'm always intrigued when a hero is forced to kill.