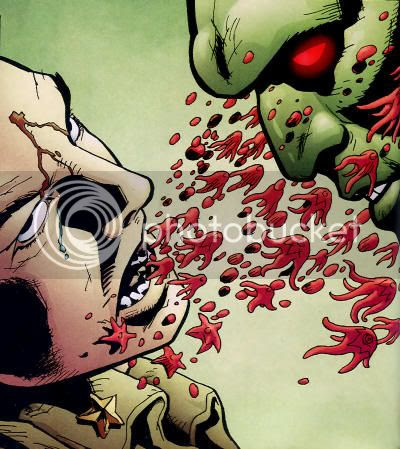 Superman held Soldat at bay, as the soldier's energy blades could slice through even his skin of steel. At Soldat's command, Ghost Lion redirected his attacks toward the Man of Tomorrow, siccing manifestations of Phantom Zone Criminals on him. Green Lantern John Stewart confronted Dybbuk, Wonder Woman focused on Marieke, and the rest continued their dances of death with the previous issue's partners.

The Manhunter from Mars knelt before the body of the soldier he had just shot dead for being infected with the Starro virus. "Forgive me. If there had been another way... I'm calling to you now. Peace is within me. Come to me. A flood of tiny Starros flew out of the corpse's mouth...

The battle won, Martian Manhunter returned all smiles, having pursued Batman's gambit to a successful outcome. "I used my mental powers to cause a soldier to believe I'd shot him. Being semi-intelligent brain parasites, the miniature Starros also were deceived. As hoped, they left the now seemingly useless host body, and entered the nearest living thing. Myself. Fortunately, China is one of the largest producers of the very thing we first used to defeat Starro; lime." John Stewart asked how J'Onn had avoided succumbing to the Conqueror Strain himself. "Just because they prey on the mind doesn't make them smart, Green Lantern. I simply kept moving my brain. I believe it was in my right calf when I immersed myself in the mineral powder."

Manhunter repeated this process to free the Hypothetical Army from the Strain, using his telepathy to learn from them the location of General Dvory Tuzik's headquarters. Soldat explained that his group had been freedom fighters, and wanted to help bring Tuzik to justice. That would not be a simple matter, as Tuzik had ingested his remaining potions, armored himself, and in so doing become a walking monstrosity. Swollen into a hulking figure, with elements of power clearly derived from Amazo, the Metal Men, Ocean Master, Prometheus and more, the General resisted. However, the various attributes of Tuzik's new powers were not compatible, leaving Tuzik struggling to move and to think. A Chinese loyalist tried to rescue the Hypothetical Woman during the melee, but Tuzik struck out at her from a distance. Without her, the Hypothetical Army would soon die, while Tuzik had doomed himself to a swift death through his power cocktail. Finally, Green Lantern had convinced Tuzik's son Azir to face his father, and assume command of his nation.

In her final moments, the Hypothetical Woman "forgave" General Tuzik, sending his mind to a simulation of the Hell, while taking the Army back with her into an astral Heaven."

Azir Tuzik assumed the presidency, and honored the JLA for their help. Batman, his right arm in a sling, promised Azir that he'd meet his father's fate if he didn't continue walking a different path.

"After the Fire!" was scripted by Gail Simone, penciled by José Luis García-López, and inked by Sean Phillips.
Posted by Diabolu Frank at 9:00 PM

If you can change shape, then it follows that you can move internal organs around inside your body -- move your brain to your right calf -- but this idea never occurred to me before and I don't remember encountering it in any other story. I wonder if it was Gail Simone's original idea.

"I used my mental powers to cause a soldier to believe I'd shot him. Being semi-intelligent brain parasites, the miniature Starros also were deceived."

He had me going there for a while, too.

Tom, I've definately come across "as an alien/robot, my brain/heart is in a different place" before. I think J'Onn used it himself before in JLA vs. Predator, when he got his head lopped/blasted off. As for a mobile shapeshifter brain, I'm not so sure.

Liss, I wasn't sure how they were going to get around that head wound myself...

Didn't he move his conciousness to his arm or something in the Ostrander series? And then he needed to take on more mass because the rest of his body was gone...for some reason I remember the whole mass thing creeped me out. I think he had to eat dirt or something if memory serves...

That is correct, Liss. Further, because the dirt was Earthen instead of Martian, J'Onn grew extra arms and had other issues until the matter was dropped without further explanation.

It just took him longer to fully incorporate it.

Has only small issues with Ostrander.