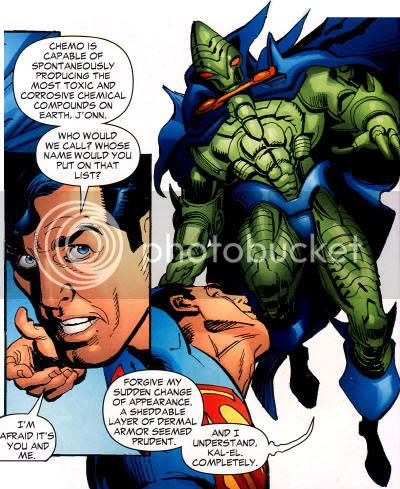 For years, after superhuman battles, governments and private industry cleaned up the messes and studied the artifacts. Today, our heroes would face the consequences of their lack of oversight with regard to these alien biological weapons, futuristic technologies and so forth. General Dvory Tuzik had sent the reverse-engineered "contingency plans" of his benefactor nations to Santa Prisca as a fleet. The Martian Manhunter noted, "Tamaranean ships, yes, or at least, for the most part. They carry some components that seem to mimic those in the ship that crashed in Metropolis during the Final Night affair." More fearsome, the other threat appeared to be "Three Chemos. Perhaps it is time to call in the reservists." Superman felt there were no reservists he'd position against such a toxic threat, indicating this was a job suited for just two of the most powerful heroes on Earth.
"Forgive my sudden change of appearance. A sheddable layer of dermal armor seemed prudent. And I understand, Kal-El. Completely."
"As always... it's my honor to fight with you, J'Onn."

In China, the small dissident band against General Dvory Tuzik were executed, but their essence visited the Hypothetical Woman on some ethereal plane. "I'm an accidental detour for those who die in my presence." She could restore the group to life, with the gift of metahuman powers, but "Tuzik... he waits for your return, with the means to control your minds." The crew would take their chances, hoping to inevitably free themselves and the world from the despot. At the same time, Tuzik's hosts began to object to his gambit, but were informed "I have your country... Inform the Politiburo... China belongs to me-- and my Hypothetical Army!"

As night fell over Santa Prisca, Batman recovered, and forced the pilot of a Tamaranean ship to eject so that he could take it for himself. Superman asked, "You... read that, J'Onn?"
"Yes. That's... very comforting."

At the Watchtower, Wonder Woman caught the Flash in her Lasso of Truth, forcing him to see through the Starro-virus' control to the "vibrational frequency that would burn them out of my cells." Wally West then abducted the remaining Tamaranean ship pilots from their vehicles, sending them crashing into the ocean. Meanwhile, the Amazing Amazon helped Superman and Martian Manhunter drag the Chemos off-world by her lasso. The Man of Steel confided, "Chemo wasn't a sentient being... We felt no guilt ripping it into pieces... and burning the remains. We don't get to cut loose like that, as a group, very often. God help me, it was actually fun. For a group formed at least partially for want of companionship, this feels like a rare moment."

The team, including the revived Green Lantern, took a breather at the Watchtower to compare notes. They enjoyed a drink and "a Themysciran confection, sweetened with pomegranate. My mother's recipe." John Stewart and Wally West were shocked and frightened by Wonder Woman's baking, but J'Onn J'Onzz dove right in. He also confirmed through telepathic scan that the captured pilots were "infected by the Conqueror Strain." Batman broke up the meeting so the team could get to work, but made clear, "Diana, Alfred will need that recipe."

"Salvage The Steel Heart" was scripted by Gail Simone, who allows the reader and story a halfway mark break. The beginnings of her distinct take on Wonder Woman can be found here, and would reappear when she took over that character's title. Her Flash seems to have been strongly informed by the hothead of Marv Wolfman's New Teen Titans and Mike Baron's solo relaunch. I believe she was already working on a Superman title by that point, so he's as one would expect. Batman here is a second-guessing bossy ass, but with a welcome sense of humor, recalling Mike W. Barr's work. Her Green Lantern John Stewart's dialogue makes it clear he's not just a miscolored Hal Jordan, most in line with his animated series incarnation, but given less to do. Finally, her Martian Manhunter is fine, if a bit of an aggressive Mister Spock.

José Luis García-López, the beloved illustrated of countless pieces of DC Comics merchandise and entirely too few comics, is at less than his iconic best here. I believe this was due to the choice to pair him with raw, gritty inkers, represented by Klaus Janson in the first half, which concluded this issue.
Posted by Diabolu Frank at 9:00 PM

I dig the armor. A good way to highlight his differences with Superman.

I really need to go out and get these issues. I passed them up when they first came out. Dumb move on my part.