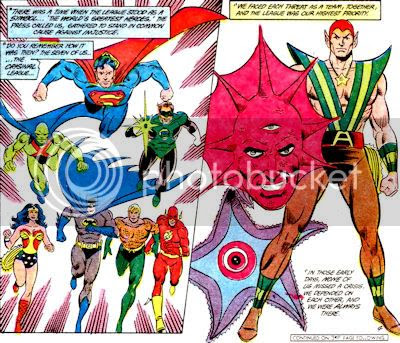 After the Detroit-era Justice League rescued Superman, Wonder Woman and the Flash (Barry Allen) from the U.S.S.R., the representatives of two JLofA incarnations had a pow-wow at the Bunker. Aquaman was forced by Superman to justify his disbanding the original Justice League of America.

...You weren't here. Neither was Green Lantern. During the Earth-Mars War, the League fought at half strength... and it was only through the aid of J'Onn J'Onzz that the Martian attack was eventually turned back...

There was a time when the League stood as a symbol... 'the World's Greatest Heroes,' the press called us, gathered to stand in common cause against injustice. Do you remember how it was back then? The seven of us... the original League...

We faced each threat as a team, together, and the League was our highest priority. In those early days, none of us missed a crisis. We depended on each other, and we were always there.

As time passed, the League grew... adding more and more members to our roll call-- and yes, losing members as well. J'Onn J'Onzz was the first to resign; the Batman, the last. And somewhere along the way, that original sense of purpose and commitment was lost as well. For some of us, the League was no longer our first priority... sometimes, not even our second.

What happened during the Earth-Mars War was only the most recent, most obvious example of a continuing trend. Isn't it obvious? The League was already dead, at least in the original sense. I simply signed the death certificate.

It's this time period of the pre-Crisis Justice League that I need to do the most catching up on, especially the Earth-Mars war/Commander Blanx, and so forth. I'm curious to read about a pre-retconned Mars, and also curious to see when the current "J'onn as outsider/feared-by-humans" theme came about....I'm guessing somewhere about this time. (Considering that in the Silver Age, everyone in Middletown really liked him.)

I've been poor about wrapping up my 1970s and early 1980s coverage. I'll have the first major Martian Manhunter vs. Despero two-parter from 1980 in a week or so, and hopefully the Last Angry God will turn up next month. I promised Shag way earlier this year we'd do a JLofA #200 crossover event, and then finally post the Earth-Mars War synopses.

Generally speaking, I thought Gerry Conway was still writing good stuff up to the introduction of the Detroit League, and Chuck Patton's arrival on art had been a godsend. I've got a soft spot for the JLD in spite of Conway's lousy plots and dubious scripts for them. Once Patton left, aside from the awesome Despero arc, it was all downhill with Conway. DeMatteis was solid on the closing issues, though.

I love that Jim Starlin cover of MM and Despero playing chess. I've never had a chance to read the actual comic--I've only seen scans of the cover online--so I look forward to your write-up.

Great cover. Okay story. There's only a few scenes between Despero and J'Onn, with the rest being a fairly generic JLofA adventure.