The Atom: The Tiny Titan 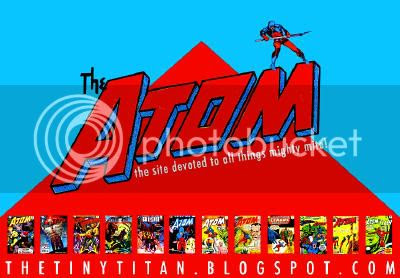 Just a couple of months after the Idol-Head launched, the actor Damian Maffei made his own blogging debut on Monday, November 19, 2007 with The Atom: The Tiny Titan blog. Devoted to my favorite Mighty Mite, Damian produced a daily post for four months, then abandoned the project for more Hollywood work. Understandably, I felt a kinship between Damian, Rob Kelly at the Aquaman Shrine, and myself as daily Blogspot DC-hero-centric posters. I enjoyed Damian's writing style, and though I'm glad a number of similar bloggers came up in his absence, none took up the Atom's flag.

One part missing "The Tiny Titan," one part wanting to swell the ranks in my "Crisis On Earth-Blog: The DC Challenge," and a final part recognizing that after Blackest Night, the Atom has never had greater mainstream visibility, I wanted the blog back online in some capacity.  I tracked down Damian at MySpace and asked his permission to resurrect "Tiny Titan" through a mirror blog...

Hey Frank, I certainly do remember you, and appreciate that you logged into the heinous myspace to inform me of such.
Rob Kelly harasses me every now and then to post something. I keep going to the Titan, and I visit yours and Rob's pages still quite often.

I didn't want to abandon the Titan blog, but the second I began to pack up and move, things went down the tubes. After that, acting stuff began to bombard me (mostly theater, which is good) and I just never got a chance to get it back on track. That and a 3 year old son won't let down.

You can absolutely carry on the Atom torch! Yes, by all means do what you can with it. And if you want stuff from me (help, items, participation) let me know. I'm still all for it, I just can't properly update it.

So let me know what you need.

And so, I began work on reconstructing the blog. My first order of business was to create The Tiny Titan Master Index of every post Damian ever produced. I then copied every piece of artwork and link from Damian's blog and reconstituted it as closely as possible at the new Atom: The Mighty Mite blog. You really do have to put them side-by-side to tell them apart, but the easy tells are that virtually all the pictures are now larger and I ditched some extraneous stuff like widgets and webrings. I'd always itched to enhance Damian's blog's pictures, but when I tried, it produced color variations and distortions I couldn't use.

Since I had the DC Holiday Special '09 #1 (February 2010) lying around, and Damian inexplicably failed to recognize Red Tornado sucks too much to bother with, covering an RT story inside became a preview for the blog that I promoted here at Diabolu. Officially though, the new blog (re)launched with a tribute to Damian's first post, The search for Ray Palmer... blogging. My intention was and remains to write "Mighty Mite" material in a lighter style than here, but it's hard to compress nearly fifty years of a character's history into two post without it running long. That's how Amazing Heroes #162: "The Tiny Titan Returns... Again" and "The Mighty Mite Returns... Again... and Again... and Again" played out.

It was about this point Damian chimed in with another progress report...

I have been keeping tabs on the site for about a week now, as that's when I saw your message...

Yours posts are outstanding. Well written and full of goodies and information. As for no one "following" you as of yet, I mean, I was surprised that anyone found and followed thetinytitan. I guess most of the attention was out of morbid curiosity for the fool in love with DC's nugget hero.
I'm sure if people knew you were doing it, they'd want to head on over there. Does Rob know what you're up to? There must be those who are willing to shine a light on it. I know I will.

I explained that I was intentionally keeping a low profile, at least until after the crossover. For in stance, while developing how to adapt a "Choose Your Own Adventure" style interactive stories into blog terms for the event, I wrote up such a beast for a pre-shrunk Ray Palmer as The Atom in "Decisions, Decisions!" The Atom also starred in a big chunk of the event's interactive story, but since it remains unfinished, I'm not going to call attention to it.

Getting back on track with all my blogs, it was time to do Birth of the Atom!, a synopsis of the Silver Age Atom's debut story, which posted yesterday.

The plan is to update "The Mighty Mite" a couple times a week, and keep the tongue-in-cheek vibe established by Damian. While I'll keep up with the 60s stories, we'll also spend plenty of time in the present, with close looks at Identity Crisis through Blackest Night, and we'll likely dive into other eras (70s JLofA, 80s Sword & Power, etc.) as well. We'll also be looking at some other characters, both ones Damian already expressed enthusiasm about (Animal Man, Hawkman, Mr. Miracle) and others I think equally appropriate. Hopefully, you folks will give it a try.

In the meantime, here's a few "Tiny Titan" related posts from this blog, and why not-- that Master List of every post from the old blog...

Labels: Atom, Martian Manhunter, The Rock of the JLA, www.martianmanhunter.com

Yes yes yes!! This is great news. The Atom's a pretty active character, considering he's playing an active role in Blackest Night, and he's even showing up in Batman: Brave and the Bold. I'm looking forward to the new improved site!

Thanks Sphinx! I can't improve on Damian's work, since it was baked with mama's love the first time, but I'll do my best to continue in it's spirit.

I have it on good authority that in the same alternate universe in which DC was wise enough to publish 5 Martian Manhunter Archives volumes (with possibly a 6th on the way), that DC has also published 5 volumes of The Atom Archives (as opposed to the measly 2 that our universe's DC has published).

The Atom was always a favorite of mine, perhaps because I have an affinity for miniatures. (And scientists.) I'm glad he's in the spotlight in Blackest Night, and that he's the brains of the outfit, which is what he should be.

And that itty bitty Atom figure sitting in the itty bitty chair in action-figure-J'onn's hand? ADORABLE.

Tom-- where'd we leave off again? I can breathe without effort these days.

Liss, I just wish I was as itty bitty as I was when I was holding J'Onn & Ray in that picture. Stupid cheese danish & frappuccinos!

Still waiting for scans of Action Comics #366 and Superman #253.

I'll probably start work on the Atom Archives when I'm finished with MM Vol. 6. Or maybe I'll do an MM Vol. 7.

Frank - That's awesome news that you're taking over the Atom blog! I'm jazzed about this. Great work so far. Keep it up!