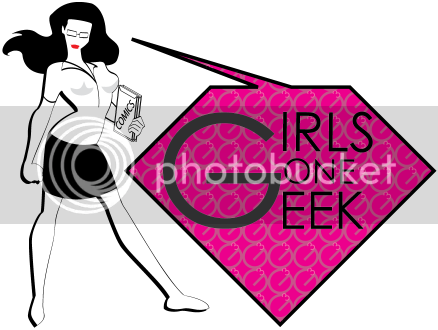 I got turned on to Girls Gone Geek by Shag, who referenced their launch at Once Upon A Geek. For the longest time, I'd stuck by Valerie D'Orazio's Occasional Superheroine out of some misplaced sense of white male guilt, even as the championing of women in comics gave way to astrology/tarot, angling for industry work, general cattiness and navel gazing. Girls Gone Geek was one of the blogs that freed me from matriarchal tyranny and reminded me that it's okay for women to discuss the simple joys of mainstream comics. Get this: Some women like versus threads! They can get into who's fighting as well as who's lovin'! They can discuss DC Comics without triggering traumatic flashbacks! Fangirls are fully-formed people, not just victims healing through public exposure!

Sorry-- I guess it's not fair to raise up one blog while trashing another. It's just such a relief to be able to have a dialogue about geek stuff with the fairer sex without it devolving to browbeating and sexual politicking. Yes, there's an emphasis on "girl power," but really, Girls Gone Geek is just a fun comics blog, gender regardless. It's true I hardly ever agree with their comic book reviews, but then, I drop f-bombs and fire hateration from a cannon. I'm kind of hard to please in that department.

I especially like their editorials and open discussions on random topics, from racism at Archie Comics to who wins in a fight between Lady Shiva and Deathstroke the Terminator. It's a good place to hang out, so give 'em a try...

Oh, geez, Frank...you put up the link to the Twilight post with all my ranty comments! I see GGG edited one of their comments to make it more politically correct and then deleted my comeback. Hmm.

I really wish I could feel the GGG love and embrace the fangirl sistership, honestly I do, but I just don't fit in there. I must be missing a gene or something.

Valerie's blog...oy. That blog scared the crap out of me and made me never want to pick up a comic ever again.

How über kindly of our favorite grouchy commenter. Thank you for reading, thank you for sharing with your readers.

You've just made up for your Twilight disdain and suggesting that Shiva would lose (btw, I still owe you an answer to your Ben Turner and Richard Dragon question)while simultaneously making my day. I look forward to many more disagreements!!! It's way more fun that way ;-)

Good post and this fill someone in on helped me alot in my college assignement. Say thank you you for your information.

Liss-- Hah! I read the initial Twi-Meh post, but only after you pointed out the comments brouhaha did I check them out! Clearly, your referencing it here had a negative impact! ;)

When I first got online, I hit the talkbacks at Ain't It Cool News like most naive geeks. It didn't take me long to figure out what a cesspool that was, but a "CHUD is better" post led me to CHUD.com, which became my new home for movie news for several years. I kind of grew out of the place (although Devin Feraci remains my go-to reviewer for opinions of value with regard to my tastes,) and now I get most of my movie news at Pajiba. All those sites love movies like I do, but I looked around until I found my cinephile sweet spot.

So seriously, why should all fangirls fit into one community?
It seems to me estrocentric comic geeks should come in an equally diverse selection of flavors. Should Girls Gone Geek or Occasional Superheroine fail you, there's always Pretty, Fizzy Paradise and Green Lantern Butts FOREVER. Hell, now there's Comics Make Me Happy, which should attract its own crowd. Whether you're climbing into someone else's treehouse or building your own fort, more power to ya!

PsyPhiChic-- well, crap. I kinda covered everything already. I dig the blog, and am always happy to debate/argue with someone unafraid to put up a fight/defense. I'll keep reading, and you keep tolerating my wrong-headedness, and we'll be set. :D

I always go to Rotten Tomatoes for all my movie-review needs. I like seeing an average of every movie critic out there, plus I like the percentage ratings.

I try to avoid the whole fangirl stereotype..and instead try to seek out blogs, comics, books, movies, etc. based on their merits and not because they were created for a particular gender or subculture. If they happen to be same gender as me, well that's fine. I try not to fit in any community, really.

I'd like to check this blog out... but it's blocked at work and the my reader only gets the headlines. D'oh!