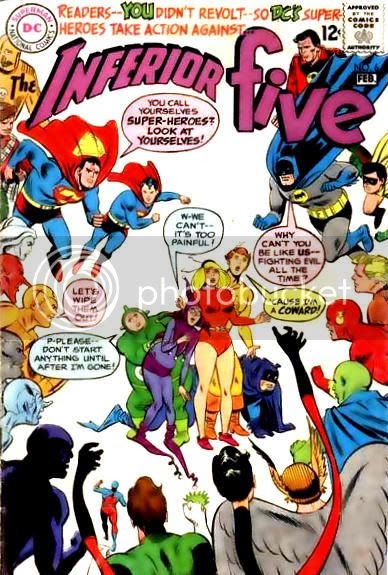 I'd say my only experience with the Inferior 5 comes from Ambush Bug comics, one of the few DC humor titles that was actually humorous. That being the case, and considering how broadly these characters are drawn, I plan to just keep things that way. However, while preparing a post about the Aquaman Shrine, I saw a post about this comic on Aquaman's Birthday. Rob decided to celebrate by unleashing a ton of everything-but-the-kitchen-sink-posts at hourly intervals (as opposed to the usual once-a-day format.) I was surprised to see our own J'onn J'onzz on a crowded cover, as drawn by Mike Sekowsky with Mike Esposito. He isn't inside, as the story is actually about the Five visiting the offices of National Periodical Publications for a bunch of bullpen cameos. Stan and Jack had fun with that sort of thing at Marvel, but DC was such a conservative company, I can't imagine that being any great shakes.

After things fell apart on my end of the "DC Challenge" crossover (well, at ...nurgh... and JLDetroit, anyway,) I had to crash study for a math test on Wednesday, and between the two took almost a week off here. I'm not one to cry about missing a few days on my pseudo-daily blog, so long as I end up with 365 posts by December 31st, so today is a good day to start catching up with glorified filler. One trip to the Grand Comics Database and some photo enhancing later, I've got my first offering.

For you purists, here's the unaltered cover scan below, linked to Comicvine's info page on the issue:

Posted by Diabolu Frank at 8:01 PM

You could do an entire week of back-of-the-head cover cameos.

Tom, I think Frank should do an entire week devoted to your one-liners.

I've been working on a blog for the crossover (a little late now, obviously) and I must say, your skills are impressive. Bloggin' is hard! Just wanted to voice my everlasting appreciation.

Actually no, M.C. I'm going to spotlight LissBirds' blog and great contribution to the interactive story as part of a second "wave" of the crossover, with my own resolution to the Atom/Captain Comet/etc. portion of the event going online. Martian Manhunter and Justice League Detroit will also be involved. You can hop onto any wave you like. The next will be either this coming or the following weekend (Valentines pending.)

Hooray for joining the good fight and starting a blog, m.c.!

I was a part of an inside joke in Inferior 5! E. Nelson Bridwell called me and said they were short 2 pages to this Parody Story on the Comics Industry. could I come up with something?
I asked him if hey did anything with the Tuesday or Thursday tours? In the old days at 575 Lexington Avenue tours were given to fans and on Thursday I gave the tour. So the joke went: This is my XXX time here. Someone else says I think Nick Pascale still has you beat!
I cannot find the book!
Can you scan that page and send it to me?
MrMouth1117@gmail.com
THANK YOU

I'd be happy to... if I owned a copy. Try Rob Kelly at The Aquaman Shrine, as I was tipped to the appearance by him, then doctored a cover scan from the GCD.