Firestorm Fan & Once Upon A Geek 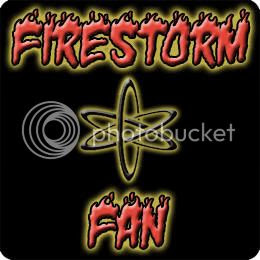 If I recall correctly, I met the Irredeemable Shag through MySpace, back when that was my contact link for this blog. He had alerted me to a post he'd done titled Final Crisis: Requiem … MM & Hal? where he questioned the depths of Jordan's affection for the recently departed J'Onzz, or more likely, Shag's feeling there was a lack of same. I agreed, and over time we became well acquainted with one another's blogs. Once Upon A Geek is Shag's flagship all-things-nerdy blog, running since March 10th, 2008 (proving himself a man after my own heart with a V novel review.) Shag later dropped me another line at the hateful Myspace looking for help promoting his newly/soon-to-be launched Firestorm Fan, dedicated to the Furious Nuclear Man, but I didn't pop in until a day or so after its debut on Jan 15th, 2009. Shag was good about going it his own way, eschewing daily posting for massive, meaty posts on a semi-regular basis. Both Once and FF are fine blogs I enjoy following, and once Shag invented the mass-super-hero-blog-crossover, I was happy to join in on his Crisis On Earth-Blog and the sequel,  Super Powers Collection's 25th Anniversary. Obviously, the basics of my crossover were modeled after Shag's efforts.

Shag's challenge at Once was a Dr. Fate crossword puzzle. I incorporated Shag's work in my interactive story involving Fate, which I mailed off to him before realizing he would be out of town for an extended period. Shag was nice enough to insert it into his post after the fact though, which was pretty darned cool. I never finished my work on Firestorm's story, but as with Fate, Shag had wrapped up all the details of his Firestorm crossword puzzle before leaving town, much to my appreciation and relief. I promise to be equally prepared before inflicting any more Challenge-related shenanigans upon you dear readers.

EDIT: I totally forgot to mention Shag's smooth radio voice during his lengthy and informative interviews with comic book creators. There really isn't anyone out there to my knowledge wrangling these veterans and setting the facts straight like Shag does, and he's to be applauded for it. Besides the Gerry Conway interview below, I also recommend his talk with Dan Mishkin & Gary Cohn!

Wow! I think I'm blushing. Thanks for the amazing write-up! You, Rob, and Kelson were actually what inspired me to do a Firestorm blog. See, I mentioned you on my first day!
http://firestormfan.com/2009/01/10/why-a-firestorm-blog/

Thanks again for the write-up. You are an amazing blogger and an inspiration to all character-specific blogs.

I forgot to mention your smooth radio voice in interviews, darn it!

Frank has touched more of us than he knows!