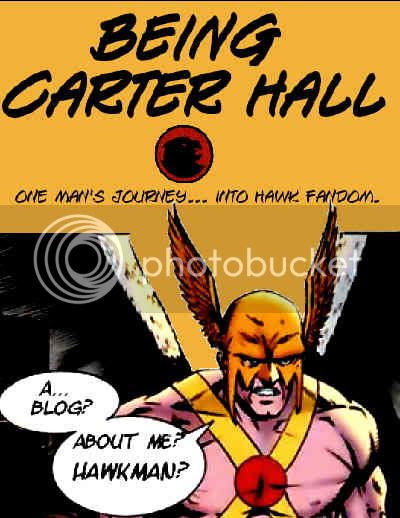 The "Thank You Train" just keeps on truckin', next station stop: El Jacone's Comic Book Bunker. Luke was a regular reader/commenter here at the Idol-Head, and I returned the favor not too long after he'd launched his first blog on Thursday, June 21, 2007. The blog's mission statement was to provide Luke a place to talk comics, and so it went.

I'm sorry he dropped his characters I like feature, especially as his selections were so blamed random. For instance, he's the first person I've ever had a conversation with who likes The Forever People, and digging Wonder Man is a minority opinion for sure. I mean, as far as I know, the Bunker is named after the secret headquarters of Justice League Detroit. Now that's an acquired taste! I guess admitting he liked that stupid Martian Manhunter guy was the last straw.

The original plan was for Luke to cover Black Lightning and the Unknown Soldier for the "Crisis On Earth-Blog: The DC Challenge" blog crossover, but plans fell through. Luckily, I'd already written an Unknown Soldier interactive story segment for my Atom adventure, and could just say here, post this! I had fun with that, but as became typical, only got to play with the Soldier for a few minutes before setting him aside. Hopefully, he'll turn up some more in a follow-up, and I'm certain Black Lightning will have his day yet!

Meanwhile, Being Carter Hall took flight (*groan*) on Tuesday, August 5, 2008, and for once, I was there from day one. I gave the site a month to get some posts up, snapped a picture of some toys I had on my kitchen counter, and tried to direct traffic over. As you've probably already figured out, the blog is a devotional to Hawkman and Hawkwoman, drawing no boundaries between the Golden, Silver, and Modern Age incarnations (not to mention animation, live action, toys, etc.) While I suspect BCH was created at least partially as a result of peer pressure (besides Rob, Damien and myself, Luke's buddy Adama was doing a Green Arrow blog, and he frequented more besides.) At least he was wise enough to steer clear of a daily, updating his blog a couple or three times a week.

My Hawkman fan heyday was in the early 90s, before reading all thirty-something issues and the annuals for the awful third Hawkman series killed my interest (coupled with the well-drawn but otherwise mediocre 2003 revival. Still, I like the guy when he's handled well, and Luke's blog is swell, so I can't explain why I don't reference it much here. Possibly because in the rare instances J'Onn and Katar are in the same room, tensions flare, and they break apart for years. Also, probably because I left all my Hawkman comics at my former business partner's house, and I haven't gotten around to asking after them since, oh, 2003?

On the other hand, now that I'm working on an Atom blog, I expect Luke's going to get sick of hearing from me (if he already hasn't, what with two blogs, a newborn, and me bugging him about that damned crossover event three times a week for a couple of months.)

Speaking of which, of course I wrote Hawkman & Hawkwoman into my Atom interactive story, and because of some crossed wires, I had Luke post his entry point at BCH. I thought his Hawkman challenge had suffered the same fate as Black Lanterns, and directed all my links to the story segment. Only today as I was writing this did I realize Luke had a trivia challenge that I'd mistaken for his "Wrong Answer Page." So, I'll start making amends here, and be sure to redirect traffic to his work once I get that blasted "wave 2" ready.

Labels: Hawkman/Hawkgirl, Martian Manhunter, The Rock of the JLA, www.martianmanhunter.com

First off, yes, the Bunker is named after the HQ of the Detroit-era Justice League. I was searching for an image of the Bunker and found the one of Steel blown up and immediately fell in love with it.

Anyways. The Bunker started out quite well I thought. I had a little schedule I would write out on a Post-It note at work that I would keep on my desk to detail all the posts I wanted to make that month. I'd write down one Character I Like, one Fair Trade, one Not Blog Ex, Weekly Dose of Weird every Friday, and so forth. Then I would fill out the monthly grid and go from there. That fell by the wayside about 7 months into my wife's pregnancy. It was a pretty good system in that it forced me to write the harder posts.

Falling into the rut of doing the Monday reviews and Wednesday previews is a trap I didn't want to fall into, but did anyway. Comic reviews and previews are too easy and too convenient. They come every week, and they are easy to write and easy to become satisfied with. Like Harvey Pekar said in an early volume of American Splendor, "There's a reliable disappointment." I started out lots to say and then quickly forgot most of it.

Do you know know you can tell if a Blogger is making a promise he won't keep? If his lips move. I am not going to say that I will post more on the Bunker and do more varied, non-typical-and-easy posts, but I will say that I will try.

Being Carter Hall definitely came about because of The Aquaman Shrine and The Idol-Head of Diabolu. So did Dispatches From The Arrowcave, frankly. rob!'s obsession turned hobby with the Shrine was inspirational insofar as demonstrating that a B-Lister can be hugely entertaining if presented in a smart, well designed manner. The Idol-Head was pivotal in demonstrating that just because something is not well known doesn't mean that people aren't interested. I have said it time and time again, but it bears repeating: I didn't know jack and spit about the Manhunter From Mars before this blog, and now he's a favorite. I hope that Being Carter Hall can do that for others like Frank did that for me.

And yeah, I know: I still promised some sort of villain content as well as Hawkgirl/Hawkwoman content. It's coming. I swear. So are more sketch day posts, and I am finally going to open up the DCUC and DC Direct First Appearance Hawkman toys. Oh wait, my lips are moving again.

Regarding the DC Challenge: Dude, don't even sweat it. People got double the dose of Hawk-challenge is all that means to me! One day when my wife has the little guy out of the house and I have some time on my hands, I will go through all those Choose Your Own Adventure links and solve the puzzle...

I'd buy that for a dollar.

The return of the Tiny Titan blog?! Sweet merciful crap dude! We'll have to do a crossover on "The Case Of The Cosmic Camera!"

Thanks for the kind words, and hopefully I can figure out a way to make my blogs deserving of them.

One other note: Do you know why my comments come in fits and starts? Because sometimes Blogger is blocked at work, and sometimes it is not. So when I am commenting, I am able to get through. If not, I have to put my comments in a .txt file, put them on a flash drive, and post them at the house!

In looking for posts here that relate to other blogs, I'm constantly tripping over announced schedules of mine that crashed and burned pretty much immediately after take-off. I'm going to remember that "lips" line so I can try to stop living it. At least that way, no one but me knows February was going to be Bloodwynd/Jemm month before I canceled it (whoops!)

I've found myself in the same narrow scheduling rut at ...nurgh..., and I'm going to work at breaking out. First step: Evict all DC content. I'm sick of that company!

Dude, I dig your blogs. Don't run 'em down. We may not get what we aspire to done, but what we've got is alright in most folks' books.

"The Case Of The Cosmic Camera?" I'm lost! You've been reading ahead of me, darn it! I'm working backwards from Identity Crisis/Blackest Night...

have planned and scheduled Steel Week at the Bunker only to fail at actually producing it at least 3 times that I can remember.

Considering that you have a DC-centric blog (now two), cutting the DC content from your other site is a wise move. I'm kind of the opposite right now, as Marvel doesn't offer a lot for me at the moment. Them's the breaks.

The Bunker is "just alright" as it stands right now. I aspire for better from it and need to give it more feed and caring. I really wanted it to be a place for me to talk about comics in general, and stuff I read and enjoy, not just the new stuff. There's a million sites out there which review the stuff which comes out every Wednesday.

Working backwards?! Man, we'll get to "The Case Of The Cosmic Camera" (The Atom #7) sometime in our 40s! Yeesh!

Luke-- I just finished the Vibe Index art, and it's sweeet! Can't wait to get to the other guys.

I want to start doing more Marvel stuff at ...nurgh... to set up a catch-all Marvel blog in the future, and eventually let ...n... settle as an Image/Indie-only joint. I'd focus on my Marvel favorites, like Captain America, Dr. Strange, Black Panther, Luke Cage, Red Wolf, Adam Warlock and other semi-to-non-mainstreamers. I'm still settling things at ...n..., but I figure the best way to make changes is to just say "Stop. No. Not anymore." I have the opposite problem though, in that I want to do more reviews, of more things, not less. Time will tell.

Easy. I'll retcon the first review out of existence! This will be the Post-DC Challenge review of the issue!

I'll take this offline, as we say in my line of business, and we'll figure it out. I have an idea which might work out.

You're right about the only way to create change is to put your foot down. I was happy with the mix of old and new and bizarre and typical of the Bunker -- I just need to get back to that. For one thing, I have to make better use of my working lunches and read more Weird comics for the Weekly Dose. And I REALLY need to settle on some sort of format for the Bad Guys posts. Ultimately this blogging thing needs to be about You (ie, the one who can prevent forest fires) and if that's what I want to do, thus, I need to do it.

Ah-- indeed. It's like with Identity Crisis #1. I did a synopsis years ago that was heavy on J'Onn and references to the Detroit Leaguers' cameos, but light on the most important figure, Elongated Man. Soon, I'll do a Ralph-centric review for the JLDetroit blog, and an Atom oriented number for Tiny Titan/Mighty Mite. So I've been there, but I have the option to redo that.