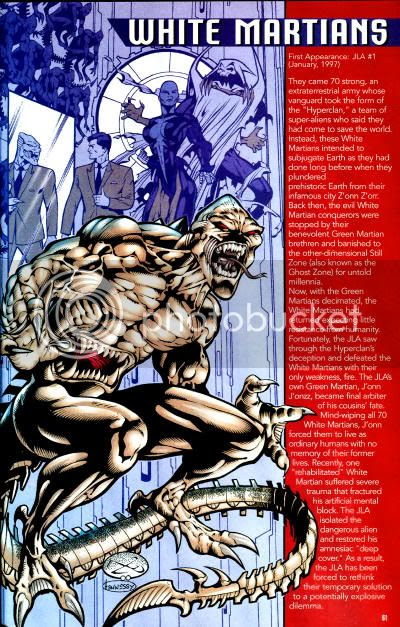 I was initially put off by the debut of White Martians in the first Morrison JLA arc, but the story was very cool, and with time I realized J'Onn J'Onzz would actually benefit from losing the title "last living Martian." Besides it being terribly derivative of Superman, the Martian Manhunter works well when contrasted against others of his own species, and there's tons of '70s continuity established to that effect. Unfortunately, while John Ostrander jumped through maddening hoops to pit the Alien Atlas against green Martians, and books as low on the totem pole as Son of Vulcan were allowed to use White Martians as antagonists, their only appearances in J'Onn's solo series were in flashback. Thankfully, since his interaction with the Whites was rather light in New World Order, Mark Waid finally turned Manhunter loose on them in a story arc from his too-brief JLA run. I'm not sure how many of these guys survived Fernus' massacre, but I'll keep my hopes up for another match.

Profile text by Scott Beatty, with art by Dale Eaglesham and Andrew Hennessey, and probably the best looking White Martian I've seen at that.
Posted by Diabolu Frank at 8:00 PM

I've got mixed feelings about White Martians. On the one hand, I think it's cool to see something from J'onn's past haunting him. On the other, it deadens the "last of his race" cachet. I really just want J'onn to have a well-crafted human nemesis. Or maybe that makes him even more like Superman? *shakes head in confusion*

I specifically do not want J'Onn to have a human nemesis. Guys like the Human Flame, Mister V and Professor Arnold Hugo should always be in the mix, but analaogous with A/B-listers like Parasite, Penguin, Dr. Psycho and so on. Respectable foes all, but not at a Joker/Brainiac/Circe level. I prefer J'Onn's conflict with human failings/xenophobia to be more abstract, rather than personified by a Max Lord type. When it comes to upper echelon villains for J'Onn, I prefer they come from his own people (Commander Blanx, Malefic) or other extraterrestrials (Despero, Mongul) so the conflict can be between the two characters, not revolve around humans vs. aliens.

Tragedy has surrounded J'Onn since 1969, but it doesn't require something as fantastic and improbable as being a sole survivor to be effective. Isn't losing your family and pretty near anyone else you ever cared about bad enough? Isn't it even more impactful that most of the surving Martians are rotten, putting J'Onn in an inescapable role as the being who must protect the universe from his own kind? He's still isolated, with the added pain of suffering the inequities of his fellow survivors.

"I prefer J'Onn's conflict with human failings/xenophobia to be more abstract" That I do like--it makes it more of an archetypal conflict.

I always feel like there should be some noirish criminal-type villain that shouldn't directly attack J'onn, but should be the "kind that got away" and caused a lot of tragedy and hurt a lot of people that J'onn could've prevented, which would only highlight his failures. Or maybe a government type like King Faraday.

"an inescapable role as the being who must protect the universe from his own kind?" True. That reminds me of Odo and the Dominion (don't know if you watched Star Trek: Deep Space Nine), a storyline which I liked. And all that can negative publicity for (White) Martians can play into the paranoia of mankind's fear of aliens...I wouldn't mind seeing them come back. If they do, I'd like to see more of the general public's point-of-view, which ties into that xenophobia aspect.

Liss, I like elusive masterminds, but am tired of decent U.S. intelligence types like King Faraday getting thrown under the bus because their field is heavily criticized these days. Despero and Vandal Savage kind of fit, and a revamped Mister V could be made to.

Yeah, I followed DS9 closer than any other Star Trek series, and I've seen enough of each to know their writers are comic geeks. Odo was pretty likely cribbed from J'Onn, so the parallel makes sense. Plus, Ostrander is a big Trekkie, best as I can tell, so he only highlighted their similarities.

I agree about the White Martians needing to be played off humanity, but that's the Kryptonians schtick right now. Maybe in a few years...

I'd never thought about the Odo/J'onn connection, but it makes sense.
Superman: World of New Krypton made me think about the DC solar system, and while they didn't use it very well at all, I think there is a mythology to be had there, with a big part for our favorite Martian.