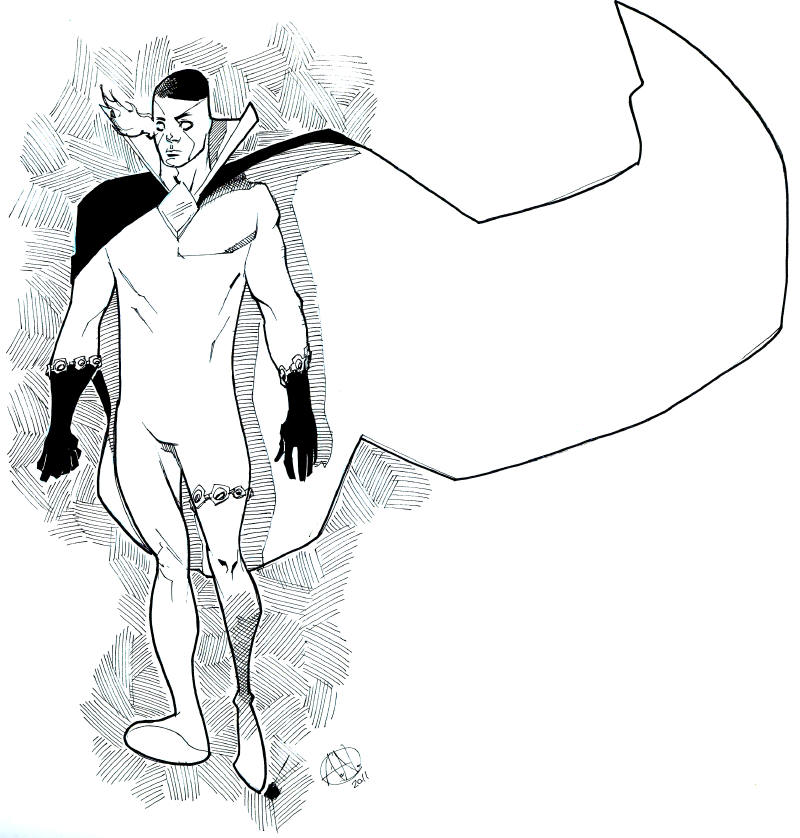 As I mentioned previously, I hit the Angel Comics booth in the Dealer's Section, and chatted with Adrian Nelson while looking at another artist's samples and rates. As I write this, I'm still not 100% certain of his name, but I wrapped up our deal for him to do the Scorch commission before turning back to Nelson. Adrian had been a last minute addition to the con, so none of his art was in the online listings or on display at the booth. However, he did have his sample book, and I was equally impressed with his work. If the other guy's most immediate influence was Sam Keith, Nelson's was Jason Pearson, so I immediately regretted having assigned Scorch to someone else. You see, Alé Garza was at the show, and my original plan was to have him do Scorch, since that character works best when presented in a stylized fashion. However, I wasn't willing to pay anybody $160 for a Scorch drawing, since she's not one of my favorite rogues, so the first artist who expressed an interest in drawing her became the default alternate.

Still, I liked Nelson's work a lot, and Pearson was only one of many influences. In fact, on one site the artist lists "John Byrne (of course), Michael Golden, Jason Pearson, Art Adams, Hiroaki Samura(Blade of the Immortal),and I'm a huge Naruto fan. I may not show those influences now, but they are what I aim for when I look at a blank sheet of paper." That turned out to be true, as I don't think the art he created for me reflects any of those guys, and I'm glad I didn't have biased expectations going in, as I might have with Scorch. As I've done many times now, I handed Nelson a stack of reference, and let him find his own muse. His selection was Bloodwynd, which pleased me. You see, both artists at the table were African-Americans, Angel Comics seem to have a multicultural skew, and I liked the idea of Bloodwynd getting drawn by one of his own for once. However, being lily white myself, I wasn't about to be the one to come out and ask the black guys to draw the black guy. Besides, I'd already had an awkward experience when a pretty girl of color at the show, likely just trying to draw my attention to her booth, asked about my Andy Kuhn commission. I don't know how you pronounce that surname, but my take ended up triggering liberal guilt and a lot of awkward stammering.

Speaking of which, you may have noticed that I usually give the artists of these commissions a summary of the character they're drawing. What fun when I had to regale them with an origin involving Negro slaves murdering their master on the plantation and creating the Blood Gem in a voodoo ritual. #$@%&*$# Dan Jurgens! I continued with the Blood Gem having passed down through the generations to its current bearer, the mysterious Bloodwynd, who basically had the same powers as Martian Manhunter, but with a supernatural bent. At one point, Bloodwynd and his demonic archenemy Rott took control of the Martian Manhunter's body for about a year, and with a copy of the Who's Who in the DC Universe Update 1993 #2 Bloodwynd Profile, Nelson was off from there.

I was supposed to come back 1½ hours later to speak with the Scorch artist about the layout for his commission, but he was still working on the two other pieces that would take up most of the afternoon. This time, it was Nelson who was absent, but he'd left the Bloodwynd piece lying out, mostly finished. Nelson's samples had all been inked, but I wasn't aware my piece would get the same treatment. Nelson had also added intricate backdrop hatch work for "free" at the $40 base rate, as opposed to the chicken scratch a different artist charged me an extra $20 for. I had obviously made a wise decision in signing on with this guy.

I came back about an hour later, knowing full well Nelson's ink work had probably long dried by that point. The artist had been concerned about having made a mistake in selecting such a minimalist character, but I thought he was very clever to liven the piece up through the shadows, and by turning the art board into a landscape, allowing the cape to sprawl. I really enjoy the fine line inks, especially how Nelson contrasted the straight lines of the direct shadow against the crosshatching on the body and the angular blocks of parallel lines in the background. Nelson was also unhappy with the flaming vision, but I think it looks great. Michael Avon Oeming drew a story with Bloodwynd early in his career, and this piece has a similar flavor, but Nelson better accomplished the vibe. For some reason, there was a tendency for artists following Jurgens to treat Bloodwynd as a sinister or aloof character, but there's a quality of innocence and concern on his face here that I quite like.

Two patterns of the show-- my hitting both parties at a two man booth, and one party at each expressing interest in color work. Andy Kuhn's Malefic saw white paint highlights and gray tones added to the rich inks. Nick Pitarra rocked colors on his B'rett commission. Nelson gave me his contact information to forward a bitmap to him to potentially color digitally. I haven't heard from him yet, but I'm hopeful it'll happen sometime in the future. Nelson was proud enough of this piece to try photographing it with his phone, and he has every reason to be. If I see him next year, we'll maybe talk about that Scorch after all...

"Drawing comics is a demanding but fun thing and I wouldn't trade it for a regular job.

Currently I'm drawing B.A.D.A.S.S.(Bureau of Alien Detection And Supernatural Sightings) and it's been fun and draining at the same time. I have the utmost respect for anyone that makes a living doing comics. I feel I get better with each page, so as the confidence builds, it's getting easier to do and the more I try to add to it. I hope you guys have fun while reading all of the Angel Comics lineup. You better..."

Not one of my favorite characters but your Bloodwynd looks great.

This is frickin' great. Bloodwynd is a character I don't know that I ever saw written well, but has a ton of potential. Probably the main reason I'm hesitant to ready Jurgens JLI V2.0.

Things that occurred to me after reading replies to this post:

* Glenn Gammerron should have been my Bob Layton commission. I'm glad I got this great Bloodwynd, but I need to get Gammerron reference for 2012.

* I planned 2011 to be a year devoted to supporting players the way 2010 was villains. Another reason to look toward next year.

* I don't have a problem with the way Bloodwynd has been written, given that he was basically a poor man's Spectre with J'Onn's power set. He certainly needs more than recycled Ghost Rider dialogue, but having never raised the bar, I can't sweat anyone for failing to exceed it. That said, I liked the Starbreaker arc and the Justice League tie-ins to "Doomsday," but that's about the high water mark for Bloodwynd.

* I think I just got myself inspired to do another series of op-ed material, thanks to Bloodwynd...