Sometimes between 1999 and 2001, I wrote up a fan casting for MARTIAN MANHUNTER: The Motion Picture for my late fan site The Rock of the JLA. Surprisingly little from that original forum made the transition to this blog, but I did break that one piece up into two posts back in 2007 for heroes and villains. Even in 2000, most of the actors I offered were long in the tooth, so today it's like an Octogenarian Society of America. I figure with the blog winding its way toward its fourth anniversary, and lacking the time/energy to finish up my fake 1967 Manhunter from Mars Movie or its planned sequel in the immediate future, I might stall with a fresh casting of a 2011 model. 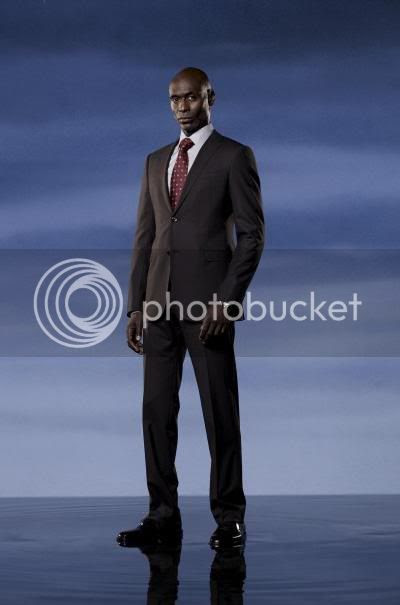 My first duty is to recast J'Onn J'Onzz, what with my longtime favorite Avery Brooks now in his sixties. I don't know if I'll ever hear a voice besides Brooks' in my head when I read Martian Manhunter dialogue, but outside of animation, there's absolutely no way I'll ever hear it anyplace else. I've spent the last decade poo-pooing other people's selections for the role. Wizard Magazine liked Arnold Vosloo because he's tall and bald and they had no imagination. Vin Diesel comes up a lot, probably for similar reasons, but also because J'Onn J'Onzz is about the only "classic" super-hero Diesel could play. Vin should do a super-hero sometime, but I think he's too self-conscious to do it well, and he still fairly drips guido even after all these years. Hugh Keays-Byrne actually got himself cast in that Justice League 90210 thing that never got made. More recently, Jon Hamm has come up a lot, who I love, especially in period clothes. Still, I think he lacks the intensity needed for John Jones, much less a Manhunter from Mars, and there's the aspect of getting Superman's casting scraps that I don't appreciate. Someone should point out to Zack Snyder what a perfect Lex Luthor Hamm would make, though.

I thought I'd finally found a Martian Manhunter after the one-two punch of seeing Idris Elba in Kenneth Branagh's Thor and Guy Ritchie's RocknRolla. One showed the gravitas and physical presence needed for J'Onn J'Onzz, and the other the dry British humor too often neglected in the character. I also thought about the demographics, with Elba's being British helping in Europe, and the black audience he's cultivated in the States through stuff like The Wire and Obsessed. Even as I started this post, Elba was my man, until I did a bit more research.

At just under 6'3" and about 215 lbs., Idris Elba is a big guy, and I expect he could bulk up if needed, but there's still an unavoidable softness to his face. I suppose that could work for a shape-shifter, but the guy is pushing '40, and he kind of looks it. My main hang-up though was the voice. In every video clip I could find, despite clear effort, I kept hearing the limey in his American accents. Further, he seemed to try to compensate with a heavy Eastern Seaboard vibe, which wasn't doing it for me.

I finally decided to go with an internet favorite, Lance Reddick. He's actually a few years older than Elba, but the dude is cut so tight that he's got that weird indeterminate age thing going on that's vaguely alien in itself. The build is also reminiscent of both the Silver Age take on the Alien Atlas and Adam Benson's excellent suggestion of Woody Strode for a '60s movie. Reddick's voice is a bit close to Justice League Unlimited's Carl Lumbly's, which would be a plus in many books, but is thankfully not so close as to become a black mark in mine. Reddick has presence and is unnerving in his laser-focus intensity. The guy looks great in a suit, and I bet his appearance would translate very well to CGI. Most importantly, I see him working as both John Jones and J'Onn J'Onzz. I think he's the guy.

Posted by Diabolu Frank at 2:03 AM

Well, this could certainly work. Man, he's got cheekbones that could cut you.

I could see this working, yes. I like how he's rather on the lean side, too.

I hadn't heard Jon Hamm's name mentioned in the same breath as J'onn J'onzz's before (not that I've been paying attention to fan-casting or anything.) I could see him as a Silver Age Maritan Manhunter villian, though.

Has that Justice League live action movie been actually green-lighted, then? Just a brief search shows 2013 as a possible release date. (I mean, one year after the world ends...so we'll never get to see it....darn.)

Jon Hamm is too cool to play a Martian Manhunter villain. Frankly, he's too cool to play John Jones. The Silver Age MM rogues were more in the Pete Campbell or Freddy Rumsen realm, with the occasional "Duck" Phillips as a high point.

No Justice League movie yet. Avengers doing well might earn a green light, but after Green Lantern, a poor showing for Man of Steel might do even that in. The abortive George Miller project from 2008 was the closest we've come to one.

Jon Hamm would be the guy for an American Secrets movie. But for a modern day Martian Manhunter, it's Reddick.

Good choice. He is great on Fringe. He just has a very strong screen presence that makes you want to listen to him when he speaks.