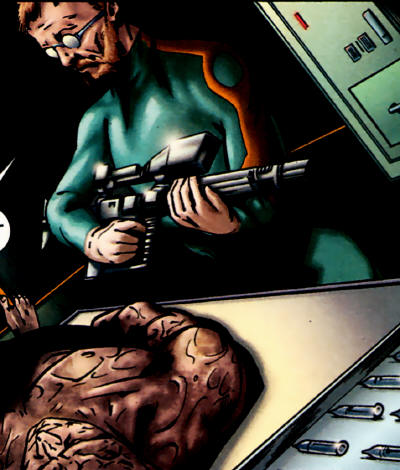 A modified AR-8 sniper rifle developed specifically to kill Martians was tested in a secret lab authorized by former Homeland Security chief Keane. This was presumably the murder weapon used against Roh'Kar, and was clearly the instrument of Jornell's death. "The design takes advantage of two facts; Martian powers appear to be psionic in nature, and their sole weakness is fire... The ordinance implants atoms which will only react to the psionic frequency we found in tests on captured Martians. The inert atoms rapidly increase in temperature, and then ignite..." The effect was to burn Martians alive from the inside out.
Posted by Diabolu Frank at 12:00 AM

I hope that this is something that does not make it over to the DCnU. Let's say that the ability to ignore a dreck series as part of continuity is a bonus.

By the way, Frank, there is also a new interview with Paul Cornell and some additional art work up at http://www.newsarama.com/comics/dcnu-take-2-stormwatch-110818.html

In DCnU the only stories that will still be in continuity are this mini-series and the Human Flame story from Detective Comics #274.

Tom, you're a valued contributor to the blog, but we can't have that kind of inflammatory talk around here.

Human Flame? Inflammatory? Is this mic on?