Sometimes between 1999 and 2001, I wrote up a fan casting for MARTIAN MANHUNTER: The Motion Picture for my late fan site The Rock of the JLA. Besides being terribly out of date, my casting of heroes and villains skewed very much toward the relatively recent Modern Age. Since the Martian Manhunter was in something like 150 solo adventure strips over thirty years before that period, and about a third as many in the fifteen years I focused on, I essentially cast the Manhunter-centric Justice League movie. I'd like to rectify that, starting with a character from an early 1970s team-up with Superman... 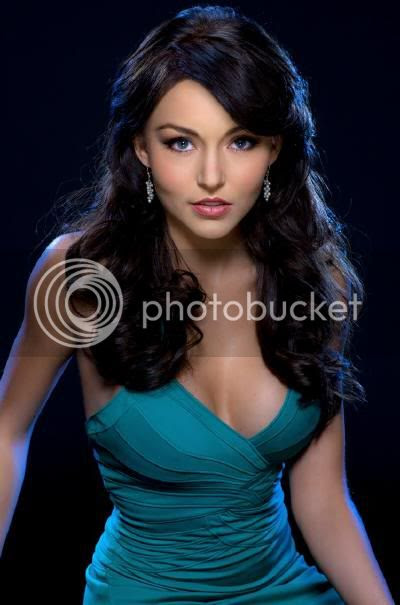 My girlfriend used to watch Teresa, a Mexican telenovela that has been restaged several times since its original 1959 run. The 1989 version launched Salma Hayek's career, while the 2010 version seems to continue the climb of the titular star, Angelique Boyer. The French-born actress/model/singer got her start on three seasons of the popular teen musical/drama Rebelde, which really stood out when I used to see it racked prominently amongst department store DVDs. Part of Boyer's transition to mature acting roles was the time honored tradition of appearing half naked in lad mags like Maxim, but she somehow managed to show her legitimate chops on the crime drama Mujeres Asesinas 2.

Teresa completed its Mexican run in February, and is currently being rebroadcast in the United States as one of Univision's daily primetime staples. The character is a gold digger who mercilessly jumps from man to man and grudge to grudge seeking ultimate riches. Boyer seems solid in the role based on my nil understanding of Spanish, but truth to tell, that kind of part is a dime a dozen. Like Teresa, Bel Juz plays innocent, but she has no conscience, and there are so many starlets who are kindred spirits in Hollywood that the Martian femme fatale would be a synch to cast. For instance, Christina Hendricks proved she would have been perfect in a guest appearance on Firefly a decade back, and I just finished watching Kristin Bell do a similar turn on the first season of Deadwood.

The reason I specifically chose Angelique Boyer is, well, she's kind of funny looking. I don't know if she has implants or surgical alterations or what, but there's something feline and artificial about the actress. Don't get me wrong, she's clearly a very attractive woman, but I like that off, alien quality. There are plenty of other actresses who could do a fine job with the role, so if I'm going to pick just one, I wanted someone who could be distinctly different...