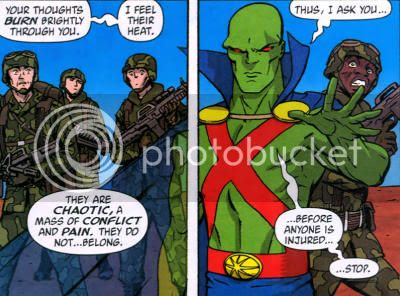 Following energy eruptions detected in South Africa, Superman and the Martian Manhunter were surprised to find themselves surrounded by U.S. Army troops pointing guns at them. Captain Yoshiba asked what the heroes were doing in the area, and while Superman explained, J'Onn J'Onzz reached out telepathically to Major Tim Zanetti, a primary source of the unusual energy.

Zanetti had lost decades of his life after coming into contact with other-dimensional forces that fundamentally altered his being. Zanetti mocked the heroes, who had emerged during his coma. In the first of several instances, J'Onn J'Onzz's telepathic eavesdropping was represented visually through the Martian pantomiming the Major's motions a panel apart. Superman was clearly stalling as he tried to reason with the intractable Captain Yoshiba. J'Onzz asked about "that being," and Dr. Paul Chambers began to answer "Mr. Manhunter, sir--" but was silenced by the captain. "That is classified information, sir. And JLA or not, it will remain classified." Superman didn't figure Captain Yoshiba liked him much, and in the absence of a clear threat, the JLA would have to leave. Batman, sneaking about in the distance, found traces of a prior battle with the terrorist organization Kobra. 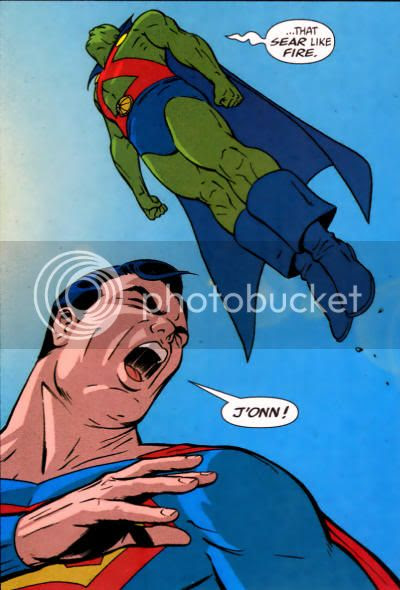 The Martian Manhunter was concerned about this being touched by the breach. "A hidden threat is often the most lethal. I tell you... something is going on here. And it centers on that individual. From the moment we arrived, I sensed powerful thoughts, thoughts that concern me. At times, unfocused, on the edge of perception. But then moments of frightening clarity... that sears like fire." As the Manhunter flew off without warning back toward the army, Superman shouted "J'ONN!" Yoshiba started freaking out, demanding to contact General McClellan about the situation.

Zanetti's fellow breach casualty, the malevolent Herdsman, opened a wormhole that the Major could sense. Zanetti reacted very badly to the dimensional shift, and could not be calmed by his handlers. A voice was heard amongst the soldiers surrounding Zanetti, and a translucent blue cape slowly began to appear, until the form of the Manhunter from Mars stood between them and the Major. "So. As I suspected... you were the source of the energy disturbance we detected. Intriguing. Your thoughts burn brightly through you. I feel their heat. They are chaotic, a mass of conflict and pain. They do not... belong. Thus, I ask you... before anyone is injured... stop." 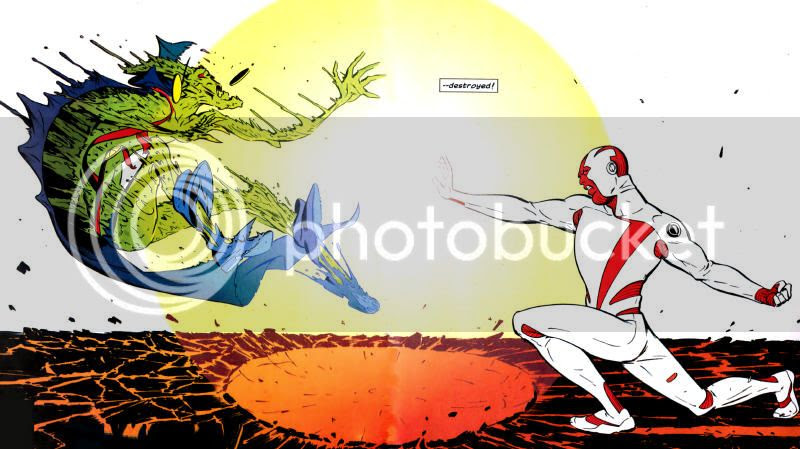 The Major somehow knew the Herdsman wasn't dead, "I know he has brought others with him. And I know this refugee from a bad drive-in movie wants to stop me. Which makes him my enemy. And enemies are to be-- destroyed!" Tim halfway liquified the Alien Atlas with an energy blast. "You said you felt my thoughts? And you still wanted to stop me? What kind of monster are you!?" The kind whose injury would justify the Man of Steel popping Tim in the kisser. A battle ensued, and though Zanetti performed well, Superman ultimately reined him in.

Batman draped a cape over a haggard looking Natural form Martian, and Kal-El asked if he was all right. "I am... coalescing." As for Tim, "I could not read him precisely, my friend. I only know beneath the intense chaos of his thoughts... there is a dark core that threatens to grow and overwhelm him." Regardless, the Flash radioed Batman to tell the team the Pentagon had ordered their immediate evacuation. Superman planned to keep an eye on the operation though, as "They're in over their heads..."

"Heroes" was by Bob Harras, Marcos Martin and Alvaro Lopez. Where Captain Atom was Steve Ditko at his earliest and most commercially mainstream, Martin does an excellent job of gently tapping the vein of divine weirdness Ditko mastered in the late Silver and Bronze Ages. He also works a fine looking on-model Martian Manhunter. Harras does a great job of making everyone on the scene wrong and right, really testing the loyalties of the reader. A good issue all around, and if you'd like to read more, check out Breach @ Power of the Atom.
Posted by Diabolu Frank at 12:11 AM

This looks pretty cool, but at the same time, you can take this "job" and shove it. :p

Nah, this one was okay. Breach was an extremely powerful being who could throw down as advertised.