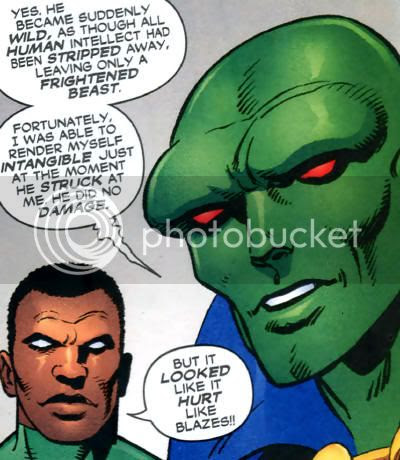 Flashback: That part where the enlarged Rita fell through a wall? Happened again. The new kids joined the fight, with Vortex being clever enough to create a portal toward a solar light source. Unfortunately, while in possession of metahuman bodies, the vampires were safe from the sun.

Presently: The Chief explained to Nudge and Faith how to separate the vampires from the metahumans, the sun hit the bloodsuckers, and they erupted in flames. The punk kid teleported to Castle Crucifer with Negative Man in pursuit. Larry continued talking amongst the Patrol about the stuff he was doing as Negative Man, until the pain of separation caused the energy wraith to go crazy. The Doom Patrol followed up, and found Green Lantern John Stewart trying to contain Negative Man while Batman saw to Martian Manhunter. With Larry's arrival, the wraith settled down, and returned to Trainor. Larry was concerned about the attack on Manhunter. "Fortunately, I was able to render myself intangible just at the moment he struck at me. He did no damage." Come to think of it, most of that was still a flashback, after all. 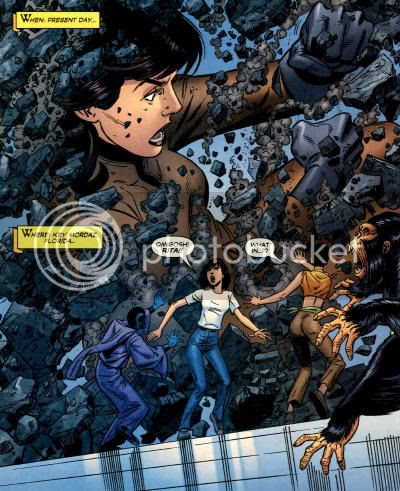 The punk kid wormhole guy tossed Batman aside and tried to escape, but Rita Farr had figured him out through subtle clues, and killed the vampire with sunlight. The Sleuth from Outer Space offered, "Excellent deductive reasoning, Miss Farr. My compliments." Trainor apologized for the attack on J'Onzz, and everyone went their separate ways on good terms. Bruce Wayne later blew twelve million dollars buying Castle Crucifer and having Green Lantern tear it down.

In the aftermath, Faith remained to train Nudge in the use of her powers, and Rita told the Chief that her group had decided not to rat him out for using Nudge as bait. "It's not something you are ever going to do again."

"Hearts of Darkness" was by John Byrne with Doug Hazelwood. The book remained all exposition, yet little plot and no soul. Byrne's trying to be clever with the timeline by visiting different areas at different points, but it just feels like two issues of wheels spinning.
Posted by Diabolu Frank at 12:00 AM