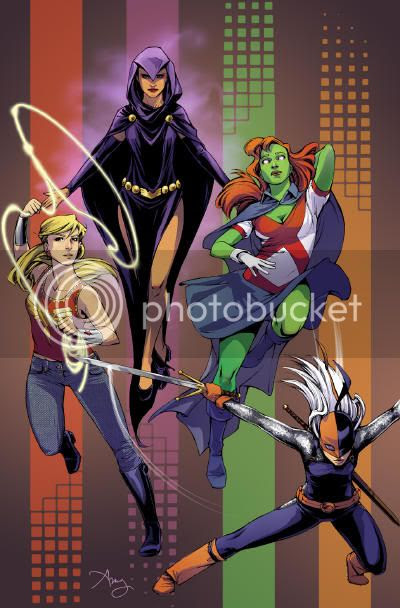 A few months back, following a shake-up on the creative team of Supergirl, incoming cover artist Amy Reeder saw her work on #62 go unpublished. On her blog, she stated, "I wish I could say it was a fluke, but in fact, I drew four Supergirl covers in that year's time that won't ever be published." So few covers saw print before that volume of the series ended that it's hard to even refer to her by her assigned role as ongoing cover artist. However, Reeder attributed her inclusion in the final issue of the aughts Teen Titans series to that piece's positive response.

"If you pick up this month's Teen Titans (out next week) you will see a few pinups in there, one of which is by me! I drew (and inked and colored) some Titan Ladies. I've always loved the thought of teams because you can contrast characters and interact them in cool ways. The tough thing with them is coming up with an illustration that has any sort of color or composition sense! That's what I tried to attempt here."

Unfortunately, that boon followed even more crumby treatment, as her planned variant covers for the new Batwoman series have also been scrapped by DC. You can see the lovely lot and read more about it on Reeder's blog.

Returning to the pin-up, which will hopefully actually run in Teen Titans #100, I like the spooky alien vibe coming off Miss Martian. She reminds me of old Brunner and Nebres Dr. Strange comics from the seventies, and given the character's history, it's neat to see her otherworldly attributes played up. I also really like the more innocent looking Wonder Girl, especially in light of some of her latter day mallrat interpretations and that horror being foisted upon us in September.
Posted by Diabolu Frank at 5:21 AM

That's a shame that they didn't use her covers they look great.

I always liked Reeder's style, especially when drawing female characters. And I was going to say I didn't like the puil-less eyes....unless it's a temporary effect of telepathic powers.