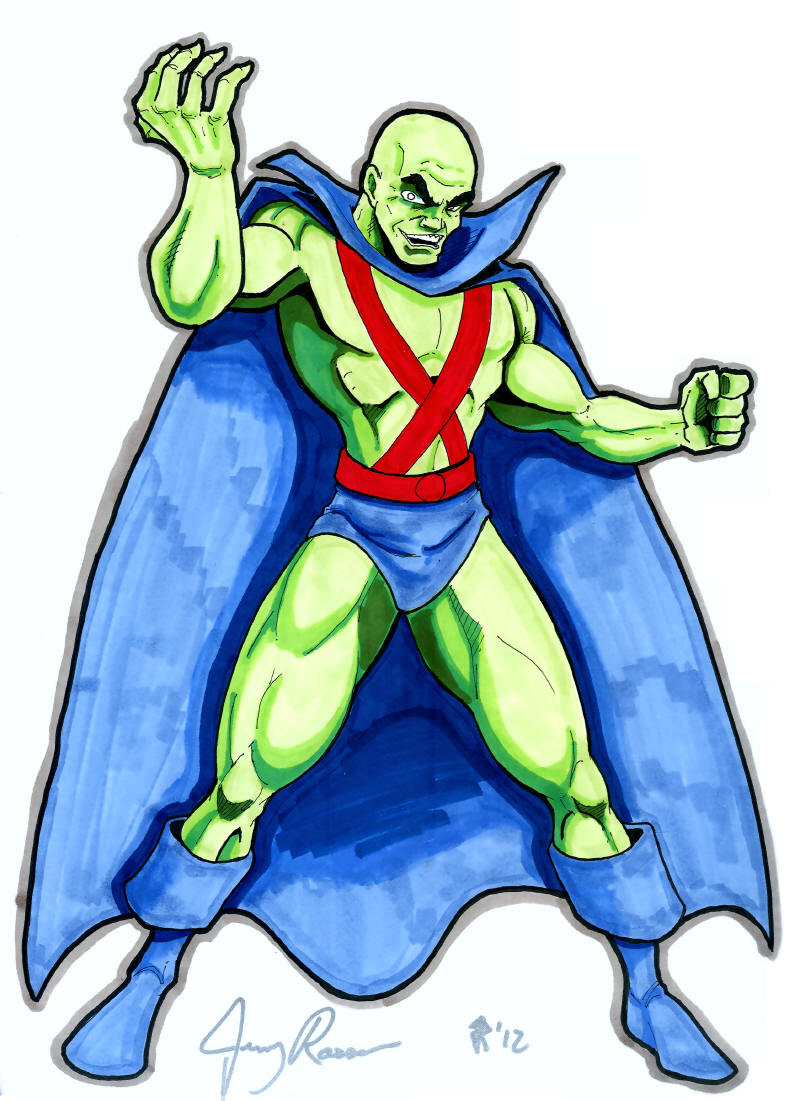 Awesomest (Alien Atlas) Art Anytime (This Week) bounds onward! As I've mentioned in the past, much of my Martian Manhunter reading has been in reverse chronological order. Despite being first introduced to the character in the mid-80s and following him peripherally through Justice League titles, I didn't zero in on J'Onn J'Onzz as a personal favorite until a few years ahead of Y2K. When I started reaching backward, it was with the then-recently cancelled Justice League Task Force, back to the Bronze Age, and then further to House of Mystery. The Sleuth from Outer Space's Detective Comics issues were prohibitively expensive because of that Batman guy, so I stopped there for years, until Showcase Presents Martian Manhunter caught me up with most of his back-up feature's run.

B’enn B’urnzz's only story was in the first comic after the issues collected in the 2007 Showcase, and would not be reprinted until the second volume finally arrived two years later. That placed him in a sour spot between my runs, though pirated scans contributed to my education about the character. I will always favor the recurring menaces from HoM like Mister V, Professor Hugo and this blog's namesake, but I also liked the goofy one-off villains from the early days. Once again, B’enn B’urnzz fits neither category, and as an unapologetic Manhunter clone, I've tended to be dismissive towards him. Positive response to the character in our annual March Madness contests made me reconsider the guy, and realize that he was one of the only Silver Age foes powerful enough to truly fight the Alien Atlas to a standstill.

When I was initially looking at subjects to commission from Jerry Rascoe, my selections trended toward the heroic. If you look at his deviantART gallery, you'll find full color figures in negative space. This strongly recalls the much loved entries in The Official Handbook of the Marvel Universe, and the effect is doubled by the artist's preference for 1980s costumes and design aesthetic. I grew up a Marvel Zombie in the age of Big Jim Shooter, so that's basically my personal golden age as a collector (with I suppose my '90s switch to DC as an individual silver age, and current muddling through bronze hues.)

As the con approached though, and I tried to spread characters to as wide a variety of artists as possible, Rascoe's selection suffered. Several were supposed to get mangafied, most specifically a Yaoi Triumph, from one of the manga girls. I ran out of steam/funds before making it past Kiriska and Lane Montoya, though. I never did round up proper N’orr Cott/R’es Eda reference, either. Since Rascoe's gallery stressed mainstream versatility, I didn't feel the need to fret over finding him one specific character suited to his style, since his style stressed universality. I figured Rascoe could handle whoever I assigned to him, and that ended up being B’enn B’urnzz.

100 years into a Silver Age future, B’enn B’urnzz was a fugitive who traveled back in time through stolen technology, the heroic Futureman in hot pursuit. Thanks to a passing resemblance to and exact couture of local hero Martian Manhunter, a conflict of identity error ensued, with the Alien Atlas eventually drafted into securing the future of Martian criminality. I informed Rascoe of this, and that all I was really asking from him was a period Martian Manhunter, but evil and with a more thuggish face. I think this was more frustrating than anything for Rascoe, who takes personal pride in getting every detail of a character's look and costume as canonically correct as possible. In an uncommon role reversal, the artist was looking to pick nits, while the patron was saying to just relax, be creative, and not sweat the small stuff.

Rascoe turned around a full color, full figure drawing within hours for just $30. I thought that price was too low for the quality, but Rascoe has a different philosophy. According to the artist, his wife was usually at shows with him, cracking the whip to knock out as many pieces as possible to expand his fan base and improve his skills. A solo Rascoe had to motivate himself at this show, but I was happy to help by paying him for as many swell pieces like this as he could provide over the weekend. Thanks to his maniacal grin and posture, no one would ever believe that this was the real Martian Manhunter, even if this bastard from days of future past dressed the same (although Rascoe adapted his cape to have a modern-agey collar that enhances his necessarily apparent villainy.) In an amusing twist, Rascoe's friend and table mate pointed out one of the artist's elderly relatives in attendance at the con, who bore more of a resemblance to this B’enn than the comic B’urnzz ever did to J'onn J'onzz. My lousy scan blanches Rascoe's vivid colors, but you can still see the fun, can't you? For more Jerry Rascoe, your best bet is his regularly updated Facebook page.

Posted by Diabolu Frank at 2:06 AM

I do, sir! Thank you kindly!