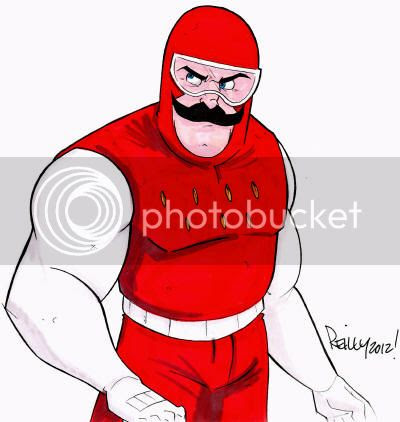 Best (Martian Manhunter) Art Ever (This Week) continues! Rob Reilly has done work for Red 5 Comics and Image, as well as self publishing his own AKA with writer Steven Walters. That last one, a violent ode to '70s exploitation cinema and enormous mustaches, led me to select Reilly as the best possible artist to depict The Man Who Killed The Martian Manhunter (not pictured: and his army of helpers.) That's right folks, it's time for the limelight to land on one Mike Miller, the mother-lovin' Human Flame.

For those not in the know (in part because I've been terrible about covering the loser here,) the Human Flame was only the second proper super-villain to ever battle the Manhunter from Mars in his solo series. To be fair, J'onn J'onzz had already gone through nearly fifty stories involving gangsters, mad scientists, and extraterrestrial nogoodniks, but he was never exactly flush with stereotypical crazy crooks in costumes that plague most other super-heroes. When I came up with the term "Vile Menagerie" for Manhunter's enemies, I just wanted something that sounded cool. I never expected that once it came down to analyzing those villains as a valid collective, they really would end up better resembling a bizarre bestiary than a rogues gallery. Anyhow, after The Falcon came the Human Flame, a seemingly average schlub who built a suit that could project flames in order to impress his friends and rob banks. Flames, it cannot be emphasized enough, that came out of his nipples. The whole hilarious sage can be read here.

Despite his role in Final Crisis and a subsequent spinoff mini-series, Rob Reilly was completely unaware that this was an actual character published by DC Comics. "Fans own character: The Human Flame. I love how afterwards I realized I drew Bill the Butcher. I love those types of mustaches and yes, he had one!" You can compare the lip coif of Reilly's first finished commission of the con and the reference I provided here, but the short of it is that Mike Miller's original tame tickler just was not fit to cut a rug, so I went to an artist capable of providing the Human Flame with a love broom truly worthy of his magnitude. I think the expressive eyes are fantastic, and only regret that I didn't get a full figure drawing.

As usual, the color in my photocopied scan shows poor fidelity to the original art. The reds should be lighter, while what registers as a pink hue to the face is actually a more proper flesh tone with gray shading. Speaking of which, shadows on the arms dropped out almost entirely, doing the artist's detailing a grievous disservice. The ones in the elbow pits are mostly gone, the ones on the hands nigh imperceptible, and the ones on the back of the palm completely vanished. I wrestled with this scan for a long time, so I apologize to the artist for this shoddy representation of his work, but it was the best I could do with the tools at hand. It makes me glad that so many artists snap a picture and tweet their work, so you can see it in a different light than the way it managed to scan.

At $50.00, you may wonder why I didn't get a daily piece from Reilly at the con, instead of letting all these other guys get theirs. Once again, the curse of affordable accessibility strikes. Here's a quote list and the artist's online store, allowing me to place an order whenever I like in the future. I like, and do so plan, but I ended up spending con cash on more immediate and less web-attainable pieces. Reilly's a cool guy with an expressive style, so I recommend giving him a shout, and I'll catch up with him myself when I have the bread for more goods! 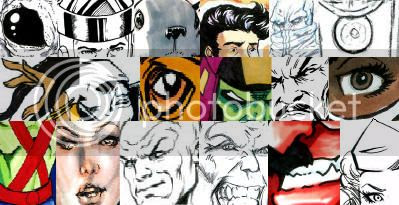 That sketch is perfect. Love it.

I love the expression and the mustache, especially. Kind of getting a 19th century strongman vibe from it, which could be interesting.