Bloodwynd the Second Worst Leaguer Ever? 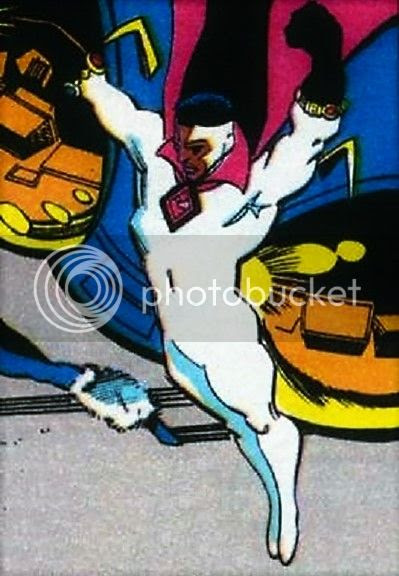 Well, another truncated Summer of Saturn is drawing to a close. I'd have liked to have gotten through to the synopsis for #7, but considering I was stuck on #2 for something like three years, I'm very pleased with the progress I did make over the past two months. I also have lots of major pieces 50-75% finished, like bios for Jogarr and Commander Synn, that will surely get pushed through next year.

Bloodwynd on the other hand has not been so lucky, still stalled out a few issues into his Justice League America run. I'm not a huge fan, but as a misguided bit of '90s window dressing, he has his notoriety. That was apparently enough for him to "earn" a second place ranking in Newsarama's 10 WORST Justice League Members of All Time countdown, though...

BLOODWYND
"Saddled with a name that suggested pandering to the Image Comics dynamic of the early 1990s -- no less an authority than Grant Morrison commented that "he does appear to have based his super identity on some alarming rectal trauma" in his Supergods book of last year -- and a confused debut that appears to have been based on the Martian Manhunter stealing his identity as the result of mind control and then being rescued by the Manhunter and Justice League from the very gem that gives him supernatural control over the dead, the fact that Bloodwynd made it into the League at all seems like a victory of sorts.

Sadly, it was a victory that was short-lived as the character placed himself on inactive duty after failing to help the team in a mission, further underscoring his odd (and never explained) tendency towards passivity, a trait that rarely makes for fan favorites. Outside of occasional cameos, he has remained in comic book limbo for more than a decade."

That wasn't actually Bloodwynd's story, but it's such a jumbled mess, the misrepresentation is forgivable. I think it was Rott presenting himself as Bloodwynd while possessing Martian Manhunter's body, but it could also be Bloodwynd believing he was himself while trapped in the Blood Gem buried in a shape-shifted Manhunter. I just broke your brain, didn't I?

I argue strongly against the inclusion of Gypsy and Vibe on this list, but it's difficult to defend Bloodwynd. When he wasn't paralyzed by indecision, he was embroiled in some form of treachery, and we still don't even know for sure which powers he possessed and which were on loan from J'Onn J'Onzz. Bloodwynd was basically the token black mystic when Doctor Mist wasn't available (or EXTREME!!!! enough.) The best validation that I can offer is that at least he wasn't as wretched as outliers like the Authority analogues in Justice League Elite.


RED TORNADO
"It's easy to see why DC writers might have expected Red Tornado to be more successful than he eventually turned out to be. After all, Marvel was having a great deal of success with their introduction of the Vision over in Avengers, and if he had proven that even androids could cry, then Reddy would go even further, proving that androids could feel angst-ridden about anything and everything that ever happened to them.

As if the distinction of being the first emo robot in comics wasn't enough to make him a particularly annoying presence even on a team that specialized in annoying presences (hi, Green Arrow and Snapper Carr!), there's also the matter of his costumes: that Zatanna thought it was a good idea to give him striped leggings and an arrow on his forehead pointing to his nose still makes me wonder if she was playing some cruel joke to see if Reddy had mastered a sense of humor just yet.

Has a New 52 RT been introduced yet? If there's one character who could benefit from a page one revision, It's bad old John Smith. I wouldn't even keep his gender, much less the manic-depressive robot with a Rannian demigod inside bologna.
Posted by Diabolu Frank at 2:48 AM

Your affection for Bloodwynd has worn off on me, but I must spring to the defense of the Elite. Their series was pretty rad.

Bloodwynd was a bit confusing to me, as I just found him appearing in some comics with little explanation. Still, the New 52 represents an opportunity to redefine him. He could be given an interesting background, perhaps showing how a mystical character relates to our modern world.


I do agree with you on Gypsy and Vibe. Gypsy has survived a lot, and Vibe is getting another chance. It might be interesting to see them tweak some of the stereotypes others have about their heritages, much like Aquaman poked fun at some of the beliefs people had about him in a recent issue.

As for Red Tornado, I largely remember being bored by the character -- who seemed to spend a lot of time being torn apart and put back together. Maybe just make the character an android or go back to Ma Hunkle. J'Onn's origin stories may have multiple origins but the Red Tornado (almost wrote Red Tomato) has shifted what he is more times than I can count.

M.C. & Will, I like-ish Bloodwynd, and had a bunch of stories in mind to make him work better as a character. However, the New 52 means that all that old continuity is invalid, and there's no good reason to reintroduce a character named Bloodwynd, especially when the dude never even had an alter ego. Put another mystical guy in a featureless white costume and start over from scratch.

Alternately, put someone in a crimson costume, call them Red Tornado, and see my recommendation for Bloodwynd. No past elements need apply (no pun intended.)

Red Tornado reminds me of what musician George Clinton said about Earth, Wind and Fire when he called them "Earth, Hot Air and No Fire." There is an emptiness to Red Tornado in the comics, although he seems to be an okay mentor in Young Justice on Cartoon Network.