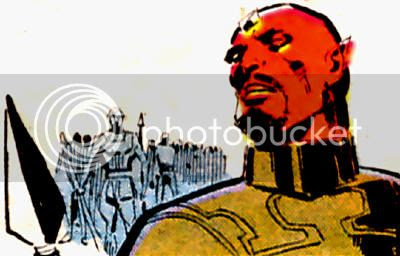 History:
Centuries ago there lived Jargon, a red-skinned Desert Dweller who resided on one of the artificial globes circling the planet Saturn. During this time, there was civil war amongst the Red Desert Dwellers and White Polar People over the Garden of Bhok. Thanks to his powers and spirit, Jargon recognized that all Saturnians were one people, and led an integrated force in attempting to forge a lasting peace amongst the races. With the aid of a mysterious and rare organic birthstone on his brow, later dubbed the Mark of Jargon, the leader waged war on anyone who could not abide his fellow Saturnians. Jargon the Mighty eventually drove out all dissenters from the Garden of Bhok, and erected "a great wall around the fertile land so that conflict might never foul its beauty." Years later, starvation ravaged Saturnians living outside the walled garden. Jargon used their hunger to leverage peace and his crowning as king in return for renewed access to the vegetation of the Garden. This made Jargon the first uncontested monarch of all Saturnians, Red & White. While racial strife continued, outright war was abolished until long after the time of Jargon.

Powers & Weapons:
Jargon the Mighty was born with a "strange, organic jewel which was a part of his own body. With it, he could read others' emotions."

Created by Greg Potter & Gene Colan
Posted by Diabolu Frank at 12:00 AM