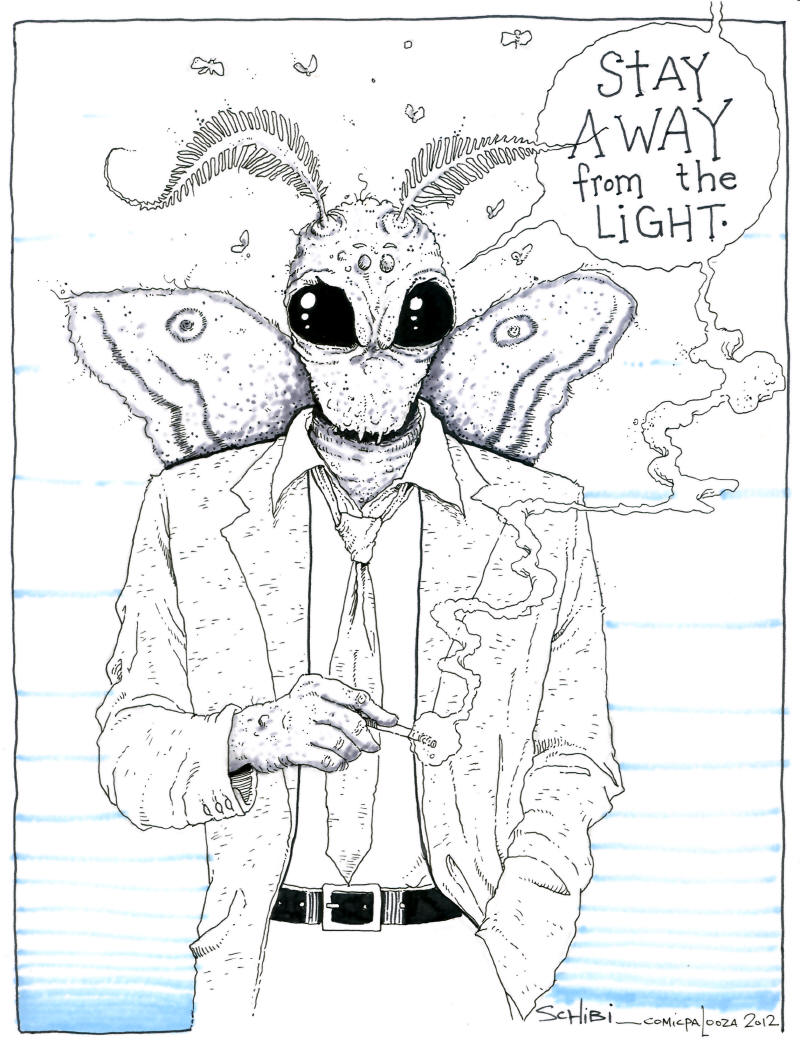 Awesomest (Alien Atlas) Art Anytime (This Week) rolls on with Cody Schibi! The guy was announced fairly early at Comicpalooza, but he only had one piece at Comic Art Fans, and the intricately detailed art on his blog drawing a blank was frankly intimidating. I knew immediately that there was perhaps no more perfect an artist for Mister Moth, as one of his recurring themes was casual schmucks with totally weird crap growing out of their heads. However, Schibi put such an impossible amount of effort into that weirdness, I thought for sure that a commission would cost a bloody fortune. After shelling out better than half a grand inside an hour at the show, I was afraid to even approach Schibi at first.

Eventually, my girlfriend and I made our way to Schibi's table, where he was hanging out with a buddy. We both really liked the art on display, but I hesitated to bring up commission rates, as I didn't necessarily want her to know what I might be spending. In a Freudian misreading, I explained to my girl how Schibi had done a blog post about hoping to make Benjamins at the show, a term she had never heard before. Benjamins are of course hundred dollar bills, but what Schibi actually wrote was "I'll also be taking commissions all weekend in exchange for a few Washingtons..." George is a much, much kinder fellow to a wallet than Franklin. For instance, my girl bought a piece for something like $20 that I initially assumed was a print, but it turned out to be the original art for one of the blog's old banners.

I didn't screw up the courage to talk money with Schibi until Saturday, and ended up getting the above piece for the ridiculously low price of $50.00. I initially was going to get an $80 full figure, but thought better of it. One of my friends decided that he would also get a commission from Schibi, but had no subject in mind, and just told the artist to draw whatever he wanted. Schibi asked if he was sure, then told him how refreshing it was to be allowed the freedom to do whatever he liked. Of course, my buddy then added, "well-- nudity is a plus." I kept hoping that he would end up with a syphilitic phallus, but no such luck. Schibi was working on the layout for Mr. Moth while I was elsewhere, and asked my friend what he thought. My buddy kind of shrugged, and Schibi started over from scratch. I'd love to know what that piece looked like, but despite his tepid condemnation, my pal couldn't be bothered to recall. Stuff like that is why I wish syphilitic peckers on him at times.

"Two 1st time commissions today: Aquaman & MR. MOTH?...how obscure can one get?! ONE appearance EVER in 1937. Having fun w this weirdo though"

"Here's that ridiculous 'Mr. Moth' Con commission I was talking about a few days ago. Proud of the tagline... "

Mister Moth is one of my two favorite pieces from Comicpalooza. I imagine that this is a 1980s, deconstructed, Bret Easton Ellis Mr. Moth. He did the high concept crime thing... it never worked out... he's struggling with a cocaine habit and child support for his larvae... "Stay Away From The Light," indeed, he warned in a voice reminiscent of Jeff Goldblum. I relish every bit of this piece, from the weathered antennae to the ebon depths of his eyes to the loose tie to the Miami Vice couture and New Wave graded neon blue back lighting. This one image makes my mind boil over with the story potential of a post-modern Mister.

I offered Schibi kudos. I pointed out that my cheapskate, overly critical buddy not only commissioned just one artist at Comicpalooza, but did so twice (this Thanos, which Schibi had to mail him.) I told him how beautifully he'd reimagined Mr. Moth. I even mentioned how my girlfriend raved about how cute he and his friend were, because sometimes I get my kicks making perfectly nice people deeply uncomfortable. Most importantly though, my good fortune from association with Cody Schibi continues. I decided on Tuesday to spotlight him today, and had I gone any other way, I wouldn't have visited him blog to learn that he would be at Space City Con this Friday. I assumed that it was going to be low rent months ago, and forgot all about it. As it happens, I'm off work and have a few more Washingtons in my pocket. Any suggestions for my own second Schibi commission (not to mention firsts from Art Adams and Whilce Portacio, two of my lifetime favorites) in the comments would be greatly appreciated...

I think that this picture is indeed indicative of the 1980s. Very nice work.

LOVE IT. This is my favorite, by far.

Thank you! This is easily one of my favorite pieces, and Will was previously the only commentator. That said, wait until you see the Human Squirrel...