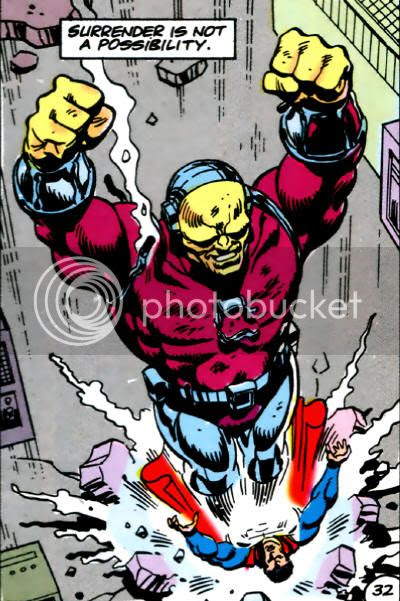 Despite being Saturnians who debuted in Jemm, Son of Saturn sixteen years before turning up in a Martian Manhunter story arc involving an assassination attempt against Jemm and a Saturnian Princess, Alien Atlas fans like them some Cabal. 67% of 15 voters kept them on, pros doubling cons. Mongul debuted in a 1980 team-up book where it was revealed that he had previously been defeated by the Martian Manhunter, and thus tricked Superman into beating the Alien Atlas and stealing an object of desire from his people. J'onn J'onzz wasn't appearing regularly at the time, so it was a memorable outing for the character. However, he only made flashback cameos in succeeding chapters of the story, in which Superman was joined by Supergirl in halting Mongul's onslaught. Starman and the Legion of Super-Heroes then helped Superman in further Mongul DC Comics Presents reappearances. Mongul's single most famous story was "For the Man Who Has Everything" from Superman Annual #11, where he also fought Wonder Woman, Batman and Robin. Martian Manhunter had a tiny one panel cameo. 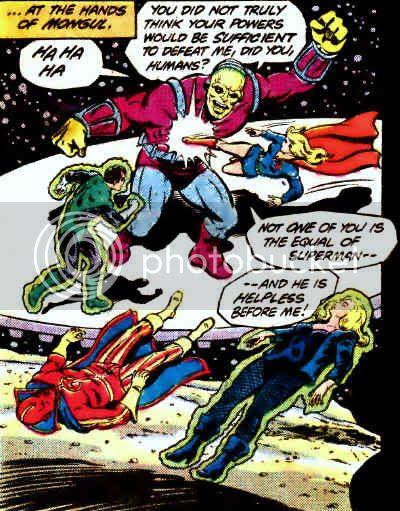 In 1989, Mongul was reintroduced into DC's new Post-Crisis continuity in a story crossing over into various Superman titles, which did not involve the Martian Manhunter. Mongul reappeared in 1993's "Reign of the Supermen," where he destroyed Green Lantern Hal Jordan's home town of Coast City, earning his ire. After Jordan became Parallax, Mongul plagued his replacement, Kyle Rayner. Mongul also found time to wrestle with the Flash. Mongul received an elaborate new origin story in Showcase '95 that contradicted his original debut, but then he was killed by Neron in the first issue of Underworld Unleashed. Mongul Junior turned up a few years later, again battling Superman before settling into a recurring role as a Green Lantern Corps foe, even leading the misleadingly named Sinestro Corps for a time with his own Yellow Qwardian Power Ring. A sister, Mongal, ran around for a while before succumbing to fratricide most foul. In the year 2011, the Post-Crisis era of DC continuity ended, without a single significant interaction between the Martian Manhunter and any single member of the Mongul family. Thirty-two years since his premier in comics, and Mongul has yet to tell the tale of his first encounter with the Manhunter from Mars. In all that time, the only meaningful story involving both characters was a two-part cartoon Justice League cartoon that basically retold Mongul's Post-Crisis origin, with its being a Superman/Martian Manhunter team-up the only real nod to the Pre-Crisis era. There aren't even any Elseworlds battles of kiddie comics to speak of. Mongul may have taken his initial bow as a Martian Manhunter opponent, but Superman ran off with the property, and J'Onn J'Onzz has long since given up any claim.
Posted by Diabolu Frank at 8:28 AM

Mongul seems more like a Superman villain. J'Onn has had little to do with him, so leave him to the Kryptonian.

I pretty much leave him as a Superman or Green Lantern villain.

Given the DCCP issue where Mongul is introduced, I have to vote him a J'onn villain.

First off I don't like Mongel, I think he's a generic super strong bad guy. But I would like to know what happened between him and John right after they fight again in the present.

The way mongel is being presented these days, I think he's an everybody type villain. I still vote yes though based on this background work you just gave.