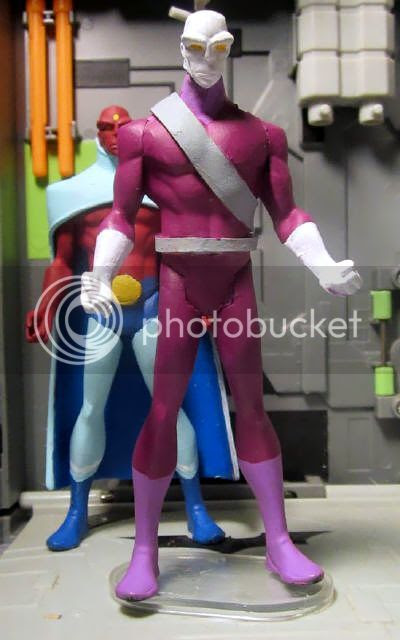 I like that the customizer took the time to find an extremely obscure reference to yellow Martians, not to mention the little seen White Saturnian guard from Superman: World of New Krypton, but then kind of tossed it aside. Pretty much all the White Saturnian males appeared to die in the Great Holocaust, and those that survived (not to mention their Red counterparts) tend to have heads covered with hair. The specific guard referenced was also a brawny, surly looking guy who had wristbands and an ornate sash, whereas this is the Martian Manhunter painted white. Actually, the posture reminds me a lot of N'or Cott, and the face resembles M'gann M'orzz's representation of White Martians in Young Justice #6 (September, 2011). I like it quite a bit, especially the color scheme, but I still call b.s. on it being a proper White Saturnian. It's a sweet Bronze Age Pale Martian, though.

While I'm being a nitpicking ass, let me also point out that we have no confirmation that there is any such thing as a "Yellow Martian," and certainly no indication that any such beast influenced the creation of Saturnians. The more I've thought about it, the more I suspect/prefer B'rett as a mixed race or albino equivalent. What makes more sense-- a hitherto unknown third Martian type, or his being the product of a Desert and Pole Dweller? Anyway, I never heard of a Yellow Saturnian.
Posted by Diabolu Frank at 12:00 AM

Frank, I do agree with you on B'rett and that this figure looks like a Pale Martian.