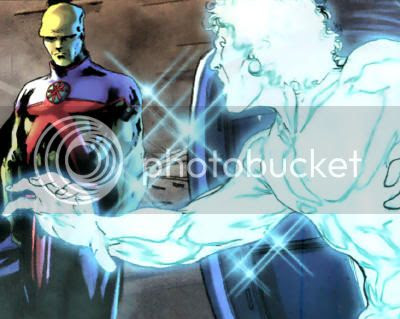 Midnighter was concerned about his increasing pleasure from killing. He and Apollo were sent by the Engineer to investigate an unidentified alien with an unfamiliar power ring arriving in Devon, United Kingdom. Despite being able to shrug off a punch from a world-class super-human like Apollo, Midnighter chopped off its arm with a big knife.

Jack Hawksmoor, Jenny Quantum and Martian Manhunter were in Italy dealing with the destructive public rampage of the Vitruvian Man, "A mind on the edge of despair... it's strange but... he actually thinks he is one of us." Jenny trapped him in dark matter, Jack rebuilt Rome in a day (scripted pun paraphrased,) and J'Onn made sure the bystanders would remember nothing. 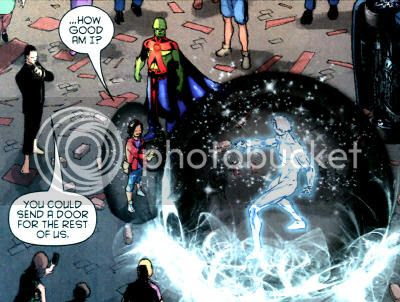 The captured and mauled alien had no heart nor blood to pump, save for a "napalm-like liquid" coursing through its veins. Its power ring normally kept it alive, but in its absence, Stormwatch's ship did the job.

Manhunter sent a telepathic call to the Engineer when their other guest woke up. J'Onn learned that Piero Rosci had been "improved" into the Vitruvian Man with the help of none other than Leonardo Da Vinci. This was done under the orders of a Stormwatch precursor called "the Veiled Sect." Piero had fallen for Isabella, but the Dark Lords forbade outside relationships, so she was assassinated. Assuming the killer was one of his own teammates, Piero went into hiding. After years of mourning the anniversary of Isabella's death, Piero had finally snapped. At least that is what the Vitruvian Man told J'Onn in polite conversation, since Piero's brain had been worked over to resist telepathy. 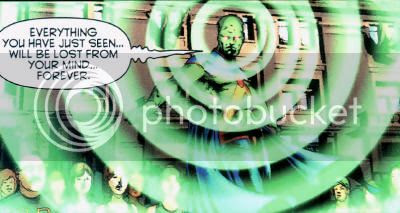 The Vitruvian Man stressed out over the retelling, beyond Manhunter's ability to psychically sedate him. Jenny believed what Piero was saying, and worried for her own future love life as hormones kicked in. Piero's telekinesis ripped through the Eye of the Storm, until Midnighter dropped out of nowhere to snap Piero's neck. Just as suddenly, a Red Lantern power ring flew up to him, stating, "Lucas Trent..." The Engineer managed to project a field of "pure rage" around the ring, holding it in "a stasis of fury."

Apollo thought Piero was a "poor guy" who could have remained in hiding if not for his breakdown. Jack thought he had a "good run" over half a millennium. The Engineer felt the team owed their newest member a debt of gratitude. Manhunter concurred "It's true. We all froze. Only Midnighter instinctively reacted." Trent remained isolated from the team, and later ran a virtual reality simulation where he fought Batman, preparing for the day his masters in Stormwatch decided to get rid of him as he had Piero. 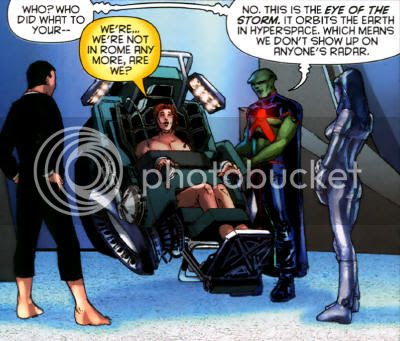 "The Da Vinci Coda" was by Paul Jenkins and Miguel Sepulveda. I also read the second half of this crossover with Red Lanterns by the same creative team, and haven't been able to motivate myself to read any more in the two months since. I wish the depths of this title were unusual, but they're actually so emblematic of the New 52 that it makes me want to fold up all my DC blogging and call it quits. I'm thankful Martian Manhunter will be out by #0, so I can drop this and virtually every other DC title (I might stick with National Comics.) I could point out how nonsensically stupid, bloodthirstily stupid, and mean-spiritedly stupid the book is, but that's self-evident, and we all surely have better things to do than dwell on it.

Posted by Diabolu Frank at 7:24 AM

While I appreciated the look into Midnighter's mind, he strikes me as someone who is only one act away from being no different than the criminals he despises. I think that this plot had a few holes in it, and the other team members were made to look bad in order to make Midnighter look good.

I do suspect DC editorial want Midnighter to be Wolverine so bad that it aches in their bones, and this issue may have been a result. Hell, they even built him a Danger Room.

In the end, Wolverine always comes back to the qualities that make him human. He does care about people. So far, the only one that Midnighter seems to care about is Apollo -- and in a more realistic comic, Midnighter would have faced some consequences for his treatment of a Jenny Quantum, who may have incredible powers but is still 12 years old.

Wolverine as homicidal berserker is what first garnered him fans, and humanizing him broadened his base. His imitators would be better off skipping straight to the humanizing, since most stall out at garden variety psychopath years after that alone was any sort of novelty.