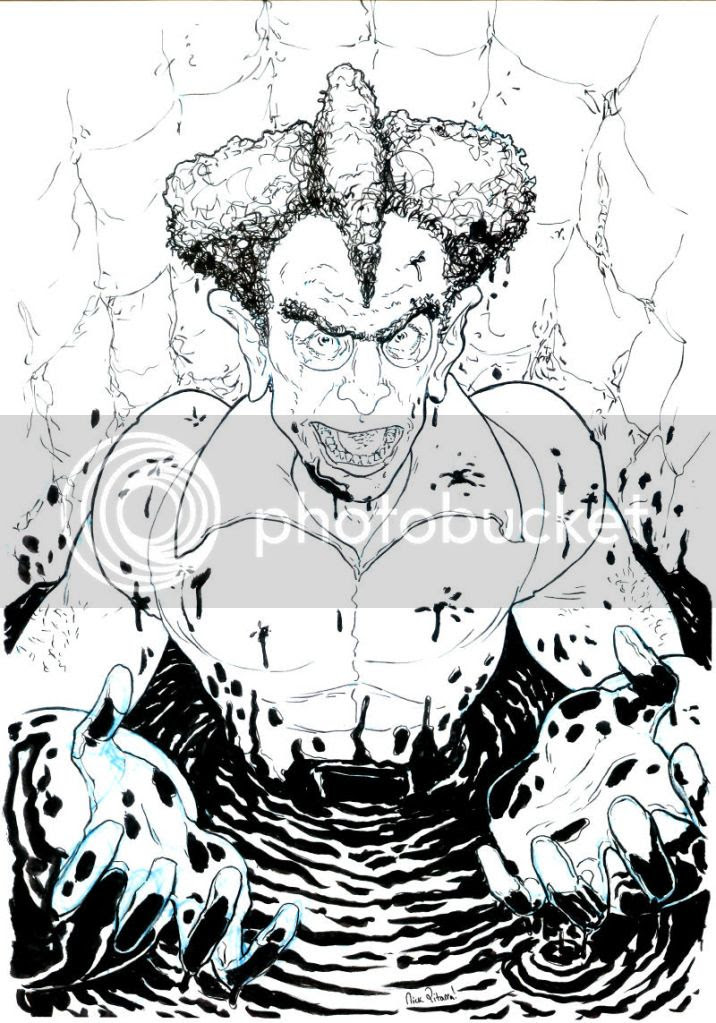 Ever since I attended my first Comicpalooza in 2010, I've tried to get as many different artists to draw as many different Martian Manhunter related characters as possible. Since nobody who creates Alien Atlas stories seems to bother to read the Martian Manhunter comics that came before theirs (case in point: creators don't know "Alien Atlas" from Adam,) the only way to see related characters drawn by someone who didn't come up with them has typically come down to me paying to get it done. Initially, I wanted one artist to draw one character... ever. That fell by the wayside quickly, between great artists doing such a good job that I wanted to commission them again and some sucky renditions of characters I wanted done better. I especially liked the prospect of giving artists a new character to draw each year, except that nobody I had worked with in 2010 or 2011 showed up for 2012. Further, with this being the fifth anniversary year, I wanted lots of commissions. As a result, folks I met for the first time on Friday might have become three commission veterans by Sunday. Truth to tell, I wouldn't do that again, since I think it becomes a bit of a grind for the artist (and tends to yield a clunker somewhere in the run.)

Anyway, one of my big disappointments going into Comicpalooza 2012 was the absence of Nick Pitarra, a highlight from the previous year. Pitarra was a really fun guy to chat with, he did a Martian Manhunter commission that I had nothing to do with, and he produced a bitchin' B'rett piece. Not only that, but he proceeded to digitally color it, free of charge! At this point, he'd only done a few issues of Astonishing Tales in 2009, and was promoting The Red Wing ahead of release. That collaboration with Johnathan Hickman did well enough to lead to a second, The Manhattan Projects. So what, Mr. Big Shot, now you're too good for Houston? Thankfully not, as it came to my attention just days in advance that the first Space City Con, which sounded like it would be garbage back in May, had massively improved the quality of their guest list with guys like Nick Pitarra (and yeah, okay, Art Adams and Whilce Portacio and bunches of others.) I was happy to catch up with Nick again, even if his rates did go up 100% (from a ridiculously low $25, but I enjoy ribbing people.) I gave Pitarra his choice of several subjects, and while he was one of two artists I really hoped would pick D'Kay D'Razz (0 did,) I was very pleased with his first choice. That was not the Saturnian, but Nick had an itch to draw the guy, and wanted to hold on to the reference just in case he changed his mind. When I came by Friday evening to pick up his first commission, I slipped him a c-note and told him that we might as well go for two this show.

I've unfairly discriminated against the Saturnian on this blog in the past. In the early years, he fell between the first Showcase Presents volume and my old stash of House of Mystery issues, not unlike B’enn B’urnzz. Where one looked too much like J'onn J'onzz, the other was too goofy looking in general for my taste, so I played up better liked easier sells that were more familiar to me, like B'rett and the Marshal. I finally read the Saturnian's story a year or two ago, and realized that he's one of the few Silver Age Martian Manhunter villainous powerhouses, and that he looks a lot better in color. This being the most successful Summer of Saturn yet, I thought I'd make up for lost time by giving the Saturnian his well deserved place in the Vile Menagerie immediately followed by his own commission.

One problem was that aside from the art reference I provided, there was nothing online about the Saturnian Criminal. Usually, there's at least my blog, but my snubbing of the guy all these years really limited options. Nick likes to think about the characters he draws, to understand their personalities and circumstances so that he can have a starting point for his own interpretation. I felt like I was slighting him by not having anything available, so I got up at 4:30ish Saturday morning to write a synopsis of the Saturnian's sole appearance and send it via email before heading in to work. Nick received, read, and incorporated the information into a preliminary design that he had ready to show off when I visited the con that afternoon (after having stated previously that I'd skip that day and collect my outstanding commissions on Sunday.)

Not only did Nick work in the Saturnian's weakness against oil, but he'd even incorporated the underground pit that the Criminal had used against lawmen from his home planet in the original story. The image is well conceived, as well as hilarious in Pitarra's unique interpretation of the sinister alien as Count Olaf with a Jewfrohawk in space spectacles. Where Joe Certa did the Saturnian's hair as three cactus-shaped ink blobs, Pitarra draws as many squiggly strands as possible, and you can count each individual tooth in his lower jaw. Inconceivable? Hardly!

For more of Pitarra's swell work, visit his blog and Comic Art Fans gallery, plus check back here for that other commission in the coming weeks...
Posted by Diabolu Frank at 12:00 AM

He's done great things with how the hair is drawn, for sure.

Wow that one is intense.

Pitarra is awesome. I've been really enjoying Manhattan Projects, and this is in keeping with that level of psychotic quality.