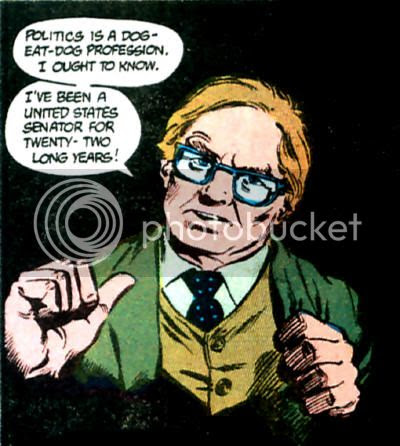 "The way home is the longest way of all." --from the teachings of Rahani


In a monologue of the sort one might expect from a stage play, Senator Frank Berkley discussed his desire to quit politics, unwillingness to give up the good life, defended his many moral compromises, and his willingness to suffocate in disquiet in his consciousness in order to ride persecution of Saturnians in order to appear to be a somebody-- a hero even. His wife stepped into the spotlight from behind him on occasion, mostly silent, and plainly less sure of Frank's convictions.

Claudius Tull had videotaped evidence of the existence and hostile intention of the Saturnians of both races, which he agreed to turn over to the senator as soon as he had made his own copies... 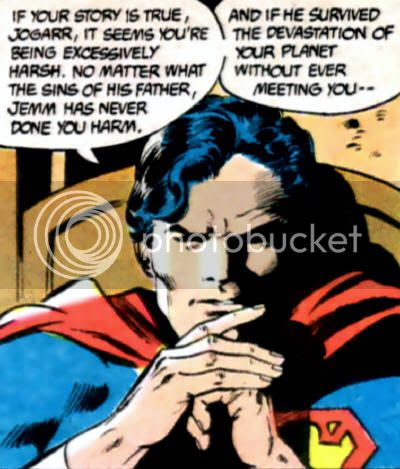 Superman was provided background on the Great War of Saturn and its consequences by Jogarr, who offered his own life story and details of the life of Jemm. Superman felt Jogarr thought to harshly of his cousin Jemm, who was not responsible for the past sins of the monarchy or any slights made by his father. Kal-El suspected that Jemm had no idea there were other survivors of his people, and from personal experience demanded that "no one deserves to be that lonely!" Jogarr pounded his fist on a table in repeated refusal, but Superman's persistent pleas softened his resolve. Jogarr reconsidered seeking out Jemm, hoping the Prince truly would be the savior of Saturn, and not instead its Satan.

In a silent series of "widescreen" panels, Jemm piloted an escape craft to Earth with pursuit ships following all the way back to New York City. Jemm managed to outmaneuver one attacker into crashing, then abandoned ship to fly under his own power. Jemm broke off a skyscraper's spire and impaled another pursuer's craft with it. Jemm had been taught that the savior would never kill, preserving all Saturnian lives, Red and White. Having slain several Whites this day, Jemm cried, and feared "his very soul shall shrivel, and he shall become sickened by his own being!" 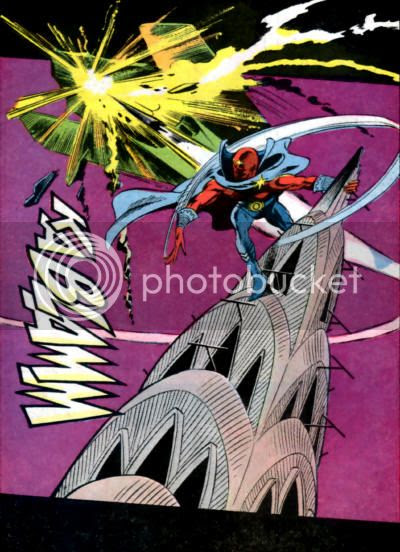 Senator Berkley was on his way to Tull's house when a sudden flat tire caused his car to swerve into a tree. The Senator abandoned his trapped driver. "Shut up, Jacobs! No damned accident... is going to... keep me from--" The Senator was met on the road by four men in suits with machine guns and skintight red face masks who gunned him down. Only a rube would expect that spectacle to convince a witness that Saturnians were the culprit, yet the abandoned driver played right into the charade. Police notified a tearful Mrs. Berkley of her husband's demise.

"Return Flight!" was by Greg Potter, Gene Colan and Bob McLeod. This issue marked the halfway point of the maxi-series, and essentially reiterated the goings on to date for latecomers and the absentminded. It was still interesting because of the variety of overlapping storytelling techniques employed, as well as the lengthy origin of Jogarr, the obvious J'onn J'onzz analogue. It was also a good time for the new inker to step in, since this issue was steeped in science fantasy. The soon to be outgoing Klaus Janson provided the cover, whose coarse grim & gritty style were suited to the otherwise cartoonish Dickensian poverty and fetishism seen in the earlier issues, but not the wholesale space opera to come.
Posted by Diabolu Frank at 12:00 AM

Thanks for the great summary of this issue. I hope that we see more of J'emm and J'Onn soon.