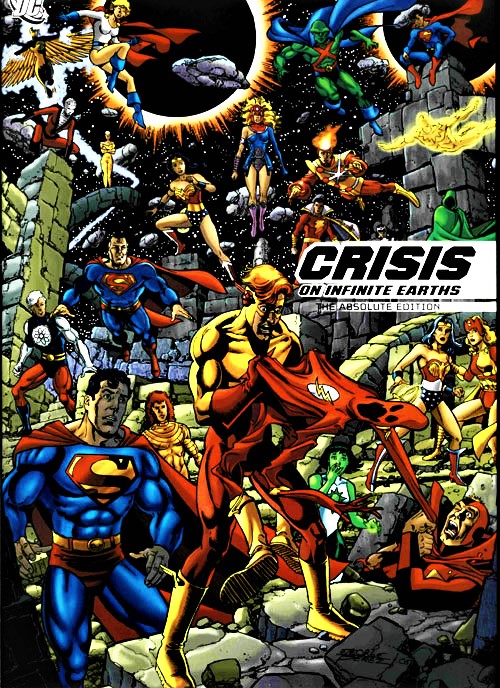 By golly, J'Onn J'Onzz has come a lomg way. First, the iconic Crisis #7 cover, in which most of his face very nearly made a barely noticeable appearance, awash in a sea of monochromatic purple mourners. Next, there's that animated tribute cover I posted earlier, where all of the Martian Manhunter appeared, though well in the background. Finally, there's Pérez's new cover for the Absolute Edition, featuring Kid Flash in the hysterical Superman role, this time clutching the remains of a mentor. While Manhunter's still in the background, he's quite prominent, not to mention one of the most dynamic figures on the page. Why, in twenty years, he may even earn his very own Crisis #7 "tribute" cover, as everyone has to get at least one. I just wonder who'll be clutching his corpse when that day comes. Speaking of which, Wizard Universe.com recently commissioned Arthur Suydam to pain his own suitably grisly homage, in the Marvel Zombies fashion, here.

Anyway, this image makes a minimum of twelve days, however you slice it. Does anyone own this thing? I've never actually laid eyes on the Absolute Edition, which helps explain why I stole the above image from Amazon.com. I'd like to check out the bonus features, and scan more quality images from the actual series, especially a certain sequence where J'Onn confronts a few dozen villains. However, truth be told, trying to reread the hardcover in 2000 was so painful, I didn't even proof the synopsis I've been running, also written about seven years past on a stinkin' WebTV. Has there ever been another comic so completely driven by exposition to the exception of virtually any other consideration? It's just hundreds of pages featuring hundreds of characters expressing factoids and going through motions. I'd rather read the entire run of Who's Who from beginning to end, which come to think of it, doesn't sound like such a bad idea. That could be fun, actually...