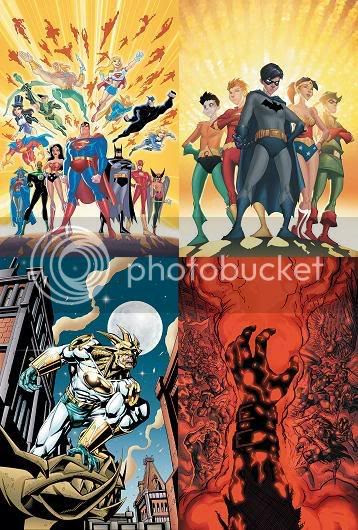 No mention of dimensions, so I assume they're doing these in standard format now?

JLA PRESENTS: AZTEK - THE ULTIMATE MAN TP Written by Grant Morrison & Mark Millar Art by Stephen Harris, Keith Champagne, Drew Geraci and others Cover by Howard Porter and John Dell From writers Grant Morrison (52, BATMAN) and Mark Millar (Ultimates, Civil War) comes Aztek, the visionary hero from the 1990s! In these stories from Aztek: the Ultimate Man #1-10, Aztek fights the forces of evil in Vanity City, where he meets costumed characters including Green Lantern and The Joker! Advance-solicited; on sale April 30 o 240 pg, FC, $19.99 US

This one is on the bubble. I read a couple or three issues, and never took an interest in the character so much as the premise. The art wasn't the strongest either, but I still think the format and price will win me over. Unless I'm missing issues from the new Question trade, that is...

UNCONFIRMED SIGHTINGS:
TEEN TITANS: YEAR ONE #3
The newly formed Teen Titans must face off against the possessed Justice League of America to the death! And in this battle, there are no winners.

No mention of a full founding League, and no Zook surely, so who knows? Man, that cover looks awful familiar, eh? Better have an "after" credit in the signature...

COUNTDOWN TO FINAL CRISIS #8-5
The Countdown ticks down as storylines converge and collide - a Great Disaster is clearly proving to be unavoidable!

This one seems likely to have EVERYBODY, but in which issues, and to what degree?

J'Onn J'Onzz does not appear in this special, and that irks me. You see, the Martian Manhunter was in the final (admittedly terrible) issues of Eclipso's solo series (I actually have a set.) Those books led directly into the Spectre two-parter, by the creative team that later put together the Martian Manhunter series. Would have made for a nice connection for the blog there, except DC instead decided to throw in a mostly unrelated Eclipso one-off instead of the actual tie-in books. I'd say for shame, but those final Eclipsos really were a part of DC's early 90's nadir in pretty much every creative aspect. I'd have to double check on the lettering, but the rest? Sub-amateur I could produce a better comic, entirely on my own, in 24 hours... even if only by virtue of not having done one at all.
Posted by Diabolu Frank at 12:44 AM