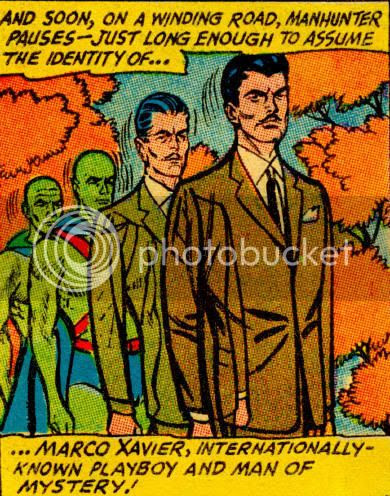 According to writer/editor Mark Waid in Millenium Edition: House of Mystery #1, "By the early 1960s, HOUSE OF MYSTERY had surrendered it's claim to the macabre, opening its doors to science fiction and super-heroes, eventually giving berth to J'onn J'onzz, the Manhunter from Mars, and, later, the decidedly unmysterious Dial "H" for Hero. Sales were slipping; HOUSE OF SECRETS had been canceled, and MYSTERY wasn't faring much better. After seventeen years, the venerable house was nearly condemned..."

Trying to save the title (not to mention a long-standing paycheck,) everything began to change at the House. The Super-Sleuth finally tracked down the Idol-Head of Diabolu, not to mention its origins. After fourteen appearances, beginning in the Manhunter's last issue as the back-up in Detective Comics, on through most of his starring run in HoM, the Idol-Head was destroyed. Dave Wood no longer supplied scripts for the J'onn J'onzz strip, focusing on the odd Robby Reed tale. Perhaps to balance the juvenile wackiness of his own work on the "Dial 'H' For HERO" feature, sole writer Jack Miller took the adorable Zook from J'onn J'onzz's custody. Not unlike Batman, the absence of a sidekick made our hero much more grim and resolute in his campaign against the forces of evil. Joe Certa, never afraid to attempt new approaches in his artwork, began to reflect the aesthetic of the swingin' 60's. His figures became more lean and angular. He concentrated detail to more realistic effect in some areas, often contrasting this intensity of linework with more abstract surrounding elements. A whole new narrative contrivance would replace the Idol-Head, bringing the Manhunter from Mars more into the times. J'Onn J'Onzz learned the existence of a worldwide criminal organization called VULTURE, run by the evil Mr.V. To confront this menace, the Martian assumed a new alter ego, and moved to Europe!

Marco Xavier was Mr. Suave-- mustachioed with slicked back black hair, giving him the appearance of a lothario. "Secretly the Manhunter from Mars! The original Marco Xavier, whose place he took, was actually killed in an auto accident!" In his smart jet suits, he very much resembled the classic Tony Stark at his most debonair. Was there ever any doubt that this guy was more than a match for Mr. V.? After all, he was an "internationally-known playboy and man of mystery!"

Mr. V was an odd bird...his face and hands rendered nearly featureless by tight-fitting white gloves and mask. His "costume" consisted of a black sportjacket over a white t-shirt with a vulture caricature in a circle upon his broad belly. He looked like a portly fanboy doing his best, if laughable, Bond villain impersonation. "Worst... Blofeld... ev-er!" Mr. V was only to be seen by his men on a large video monitor, from the considerable waist up. Secretly within thought balloons in Mr. V's presence, "Marco Xavier" ridiculed the leader with the nickname "Faceless," while conniving his end. Next to the fury of Professor Hugo, Mr. V looked a little tame.
Posted by Diabolu Frank at 12:00 AM

I was unaware of the Marco Xavier tales of the Manhunter until... last year. Yes, yes. I suck.

Anyways, reading the premise for them now, in retrospect of the actual publication, it seems like a pretty solid basis for a strip, if not one you can really sustain over the long term. J'Onn's established powers allow him to shapeshift, why not use that instead of just having him punch things like some Big Blu-err, Green Boy Scout? Of course, you can end the stories like that, but if you throw a little bit of espionage or Nick Fury-type action in the front end, you have a fairly unique product if nothing else. Again, it can't last, but you could play with it for a while.

Don't feel too bad. I was introduced to a version of the character through Amalgam, myself.

The Marco Xavier stories were an improvement in some areas from the Diabolu period, in that the stories clearly targeted slightly more sophisticated readers. However, the difference was more early vs. late elementary school, allowing for some middle schoolers who weren't quite up to a Matt Helm flick. Xavier himself was hardly a Nick Fury-- he was rather prissy and hands-off, leaving all the fisticuffs to the Martian.