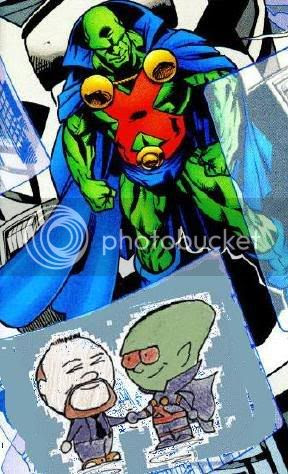 Not long after starting this blog, I received a message from a fellow under the alias "Zoiber," a Spanish "Detective Marciano" fan. Zoiber seems intent on collecting every Martian Manhunter image on the internet, and he was hoping it was okay with me if he started taking mine. I explained my belief that no one has the right to withhold a scan of a copyrighted image, so of course any of mine he cared for were fair game. Of course, a link is always nice, and bandwidth theft is just that, but you figure that goes without saying.

So anyway, Zoiber's been running an online catalog of these images since the start of 2007, and it just might be a bit of a task to get through them all, though I'm sure the process would be rewarding. Since I've been wanting to start spotlighting J'Onn J'Onzz-related internet happenings, It seems appropriate to start here.

February 2007 highlights:
Pieces of Overmaster
with the Atom!
with Green Lantern!
with Aquaman!
with Batman & Robin!
with Jemm & Infinity Inc!

For more, visit Martian Manhunter Fotolog
Posted by Diabolu Frank at 12:00 AM