So Mike Netzer threw down the gauntlet at DC to allow him the chance to become professionally reacquainted with J'Onn J'Onzz, the Manhunter from Mars. That's great, but I don't see Denny O'Neil going the same route. Someone's got to write the thing, and if we're going to go the "Post-Crisis" revamp route, it ought to be a big name. Well actually, it ought to be a small name, like a Len Kaminski or a John Arcudi. Barring that, maybe a J.M. DeMatteis, who also professes undying love for a character he reinvigorated decades back. However, that would not be a hopefully amusing and pointed satire of modern DC Comics, which is what I'm shooting for with the new, likely multi-part feature: "What Would Michael Netzer Do?" Well, he'd get a really famous scripter, who'd add major heat to the project (in some sense or another.) 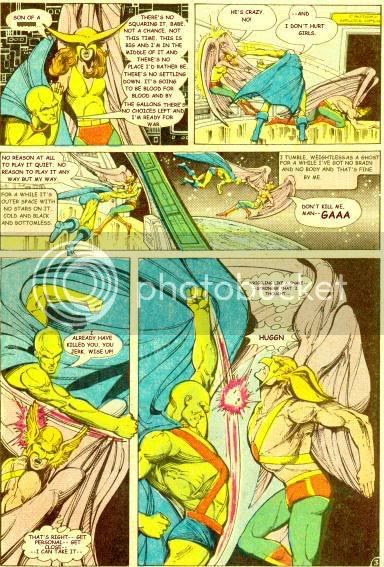 Part of me really wanted to write in the style of Frank Miller, but I wanted to play fair and use actual dialogue taken verbatim, to really sell the innanity. His advance on "DK2" was HOW much again?