GOTHAM CITY- 1957
I swear, the damndest night I’ve ever spent. I was with a cop. Name’s John Jones.

“Blast it, Slam, What kind of world is this?”

Y’see. That’s John. It’s all BLAST this and BY GOSH that. Corny as a comic book. But it could be worse. Near as I can tell, John is the only honest cop in Gotham other than the new guy, Gordon.

“Blazes! I realize that my fellow cops are all on the take... but this is a child’s life!” 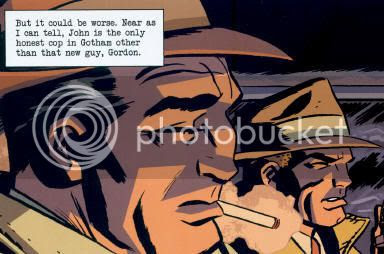 The son of a prominent financier had been kidnapped. No note, no ransom demands, for five days now. John was the only real detective assigned to the case, and sensing the cops were less than enthusiastic, the kid’s dad hired me. John and I ended up pooling our efforts. So John, who looks just like one a’ them movie detectives by the way, he calls me tonight. He’s located the kid, and we have to act fast. John’s like that. He has these half-assed “hunches” and “sources” that are never wrong. So he’s positive the kid’s in this church and we haven’t a moment to lose. How John finds all this crap out is a mystery to me, but here I am charging along behind him.

What the hell does this guy eat? He plowed through that oak door like a Japanese screen. If there’s anyone inside they know we’re here now...

“There’s no time for being cute, Bradley. The kid’s on the hotseat!”

We round a column and there it is. It’s the kind of scene you have to take in for a second-- A Catholic church filled with rejects from the Saturday matinee. They’d be laughable it it wasn’t for the weapons and sheer numbers. And holding his own in the eye of this storm is the vigilante. The so-called Batman... A brace of weirdos rush me as my eyes race around the cathedral looking for the boy. A mass of men in front of the cross tumble down the stairs-- And there he is... Then I see John-- how did he get up there so fast? I’m not sure what happened next--It looked like John was suddenly poleaxed from behind. He went stiff as a board and his eyes near popped out of his head-- Great. Now the church is on fire too. What the hell is wrong with John?

“He’s gonna knife the kid! John! For God’s sake John, get up!”
“You are the tribute! Without the Centre, all must fall away!”

Now you know me. I’ve seen my share of hard candy. I was a jarhead in the Pacific. There was even a time I collected for the juice man to make ends meet. But this-- this bat-guy. He made my blood run cold. The look on his face-- the sounds that came out of the creep underneath him... It’s the sound of the wrists breaking that finally does it. The remaining freaks run blubbering into the shadows...

And that’s John, see? Cults, kidnapped kids, beatings and even the sight of the Batman... and he’s mooning over a friggin’ book.

“Can’t open it. I’ll bet there’s a clue of some sort within these pages.”

-By Darwyn Cooke. “This scene with J’ONN is narrated by my favorite DC character, Slam Bradley. Slam is talking to JIMMY, THE BARTENDER at JIMMY’S 24-7.”